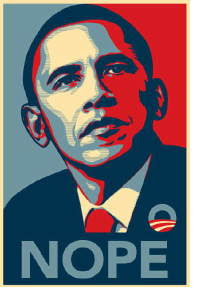 And the above tells us why Tory Bear is the better blog, TBG bugger off to the lib dems.

Obama's the most left wing member of the senate, his voting record is for more government and higher taxes. He aint conservative, geddit?!

TB, do one of those pictures for TBG, but where there's hope, put Dope.

The guy is not even a remotely credible candidate unless the left-wing media is around to pretend he is.

When will you realise McCant is a socially illiberal republican?