Iain Dale
has turned down a TV appearance. It is understood that Iain broke the news to the GMTV producers privately, before announcing the ultimate bitch slap to the world via his
Twitter feed
: 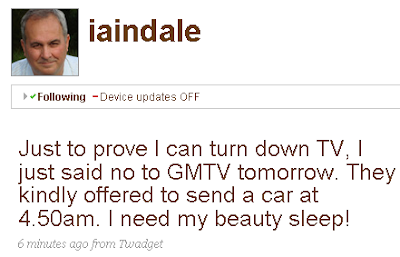 4.30am?? Explains why Garraway looks so haggard all the time.

I simply refuse to believe this story is anything other then an absolute fabrication. Anybody who follows Mr Dale on twitter, or who reads his blog, will know full well that he would never, under any circumstances, refuse to whore himself out to a television producer in need.

That had to get Cameron to stand in for him.

That's not why Garraway looks so haggard all the time.