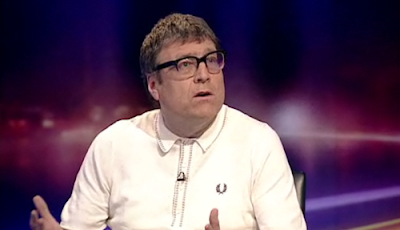 This is Martin Smith from
Unite Against Fascism
. Martin just embarrassed himself on Newsnight. Badly. Firstly he raved on about how he did not recognise the votes of 900,000 people in this country. Secondly he got into an argument with Simon Hughes who was putting forward some very sensible arguments about mainstream political parties getting together to fight the BNP. Martin the Moron however decided to get into an argument about how it was the Lib Dems fault the BNP got a councillor elected in Tower Hamlets in 1993.

Martin represents everything wrong with UAF and why they cannot be taken seriously. Here we have some creepy little scumbag with very different, but, equally dangerous views as the BNP he so hates. The BNP scum must be stopped, but the behaviour and views of UAF cannot be condoned. As TB
said on Twitter earlier
, the scenes of fascists fight fascists, a left wing civil war so to speak, were as surreal as they were hilarious. No, in fact strike that, they would be funny at the end of some black comedy, but no, both these threats are very real.

Cameron MUST distance himself from the values and practices of UAF that he apparently once condoned. No leader of the Conservative Party can ever support a movement that does not believe in freedom of speech. UAF are an embarrassment to anyone who is genuinely opposed to the BNP on ideological grounds. Firstly the left have brought shame upon themselves by letting their bastard child the BNP get in and don't try argue that the BNP aren't left wing - As someone said elsewhere racism is a dirty form of collectivism, judging not on the individual, but on the group. Secondly UAF have brought shame on the left by openly saying they do not believe in free speech.

But then we knew that all along anyway.

UPDATE 23.12: Just spotted what Martin the Moron was wearing on Newsnight. That's not a Fred Perry jumper is it?

The logo of choice of your 70s northern skinhead?

heated agreement on this one
.

Shocked that your lovely CallMeDave has allowed himself to be involved. Urgent distancing (and funding withdrawal) required, I think.
9 June 2009 23:19
Uncle Bob
said...

Can't we arrange for some caged in deathmatch...with euthanasia for the winners. But then, that would make us as bad as them. He really was a grade A plonker, wasn't he?

That must be the Martin Smith who constantly made a numpty of himself on Comment is Free! I remember reading his posts and thinking "christ, even paid NuLab shills must have more gumption than this?" It would have passed for satire in Private Eye.

Martin was a speaker at a pre-election meeting hosted by "No2EU" that I attended with a good number of Conservative colleagues. He spoke, at great length, about pretty much the same stuff he was talking about on Newsnight.

When I asked the panel if they thought no-platforming was a viable proposition any more it was veteran former Militant MP Dave Nellist that agreed the policy of no-platforming was no longer suitable in most circumstances. I spoke with Mr Nellist after the meeting who agreed with me that the likes of UAF are doing no good in the cause of fighting the BNP.

Let's hope that yesterday's antics are enough to convince those on the left who are genuine anti-facists that it's time for change in the organisations that campaign for them.

While you may argue about the many faults of the left, by very definition they are not fascist.

Martin Smith is correct. The Lib Dems did indeed help the BNP in Tower Hamlets, by distributing racist leaflets and thus giving the BNP mainstream legitimacy. It is a shame that so many right-wingers on the web seem to have adopted the same appeasement position as the Daily Mail in the 1930s.

did he seriously lump trade unionists in with ethnic minorities?!!

we should give BNP and UAF Bodmin Moor or somesuch rural wasteland and let them fight it out and televise it. would beat Big Brother 10 at any rate.

Just came across this blog and I agree that the Conservatives need to distance themselves from the UAF. The sight of anti-fascists sponsored by the mainstream parties bringing their placards down onto the heads of BNP supporters only serves to increase the dismay with which ordinary people are viewing the mainstream. Cameron said that Conservatives will be knocking on people's doors to address their concerns. I hope they do that.

The BNP want to bring back corporal punishment, national service and the death penalty. Their economic policies are more left leaning.

Can you explain why the BNP get to be left wing when their social policies are so right wing?

Is economic policy the sole guide to place in the political spectrum? If so why?

Well, I expect by now you've seen the kind of divisive, hate-filled fascism the UAF can whip up, even in the peace activists from the Religion Of Peace, who were so peaceful today (11/09/09), they were throwing bottles and bricks at the police and generally smashing the place up, even though there was no-one to fight. https://news.bbc.co.uk/1/hi/england/london/8251598.stm

The best thing people who genuinely want peace can do is to look at the wall of shame https://www.uaf.org.uk/aboutUAF.asp?choice=4 and then write to their local MP and ask if they really support egging and bricking and violence and the kind of fascism that comes through the UAF's thug-fests.

I've had the reply from Cameron - he is NOT a supporter of the UAF (as they have listed him). I'd be interested to see what YOUR MP says!