Since moving from Edinburgh TB still likes to keep an eye on the north, especially its growing blogosphere. This post from the ever wonderful 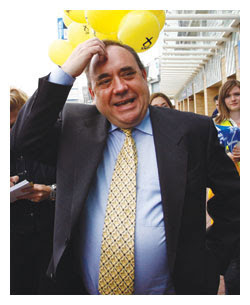 Guardian
: “Braveheart gave full rein to a toxic Anglophobia”
American Spectator
: “an anti-English diatribe from its opening”
Independent
: “has been linked to a rise in anti-English prejudice”
Economist
: “xenophobic and historically preposterous”
Guardian
: “seemingly intended as a piece of anti-English propaganda”
Sunday Times
: “The political effects are truly pernicious. It’s a xenophobic film.”

Alex Salmond
: “That film had a profound effect. Things politically were already on the move, but it certainly accelerated change. There aren’t many films which are truly important, but this is one.”

Come on then ye "cybernats" defend that one.

Historically incorrect but still a film which raised the profile of Scotland all over the world. Mention Scotland, they shrug but say "Braveheart" and they all smile.
Mind you there have been plenty of films praising England a good few set after 1707 and there is no mention of Scotland which sometimes sticks in the craw.

Braveheart - our very own Triumph Of The Will.

Braveheart - our very own Triumph Of The Will.

What an odious little tit that man is.

ToryTittleTattler said...
What an odious little tit that man is.
....

Thats not a nice thing to say about the great Scottish Unionist!!!

TB, you wrote "This post from the ever wonderful Scottish Unionist made TB chuckle:
..

Anyway its all circumstantial nonsense but please read my counterbalance with FACTS.

https://www.advancedmediawatch.blogspot.com/
..
BTW i agree, his article did make me chuckle as well.