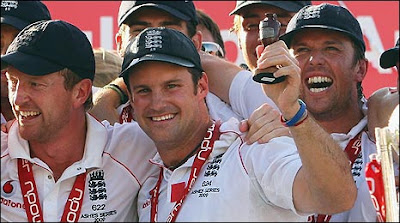 After a fairly mammoth drive from the south of France, TB came out of the tunnel to the last half hour of the cricket. He has just got home for the first time in five weeks and was greeted to these two great images when he sat down to check his email. 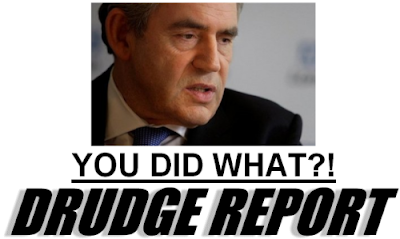 Brown is in deep shit
, well done to
Drudge
for highlighting this to his millions and millions of American readers. After three fantastic weeks in the US, where conservative politics is done properly and two blissful weeks in the south of France, as well as the pending real world TB has to face, coming back to the UK was quite hard work, but what great news to come back to. Brown is on the rack again, the SNP have destroyed any semblance of credibility they once had (no confidence vote in Holyrood anyone?) and England have won the Ashes.

It's time for the Conservatives to seal the deal, it's nearly conference season. Labour's will be a bloodbath but the Tories cannot just sit back and watch. Apologies for the quiet blogging of the last few weeks, but panic not...

Things are going to get very interesting again, very quickly.

Heh. Can't wait to see which paper army Drowning Strasse will throw into the offensive next.

#Are you Scotland in disguise!#

cityboy
scotland dont do cricket sadly
we dont do much
least we can admit we are shit though, and not blame referees/weather/dirty foreigners/umbrellas/ etc etc etc

Your country is, however, Colonel Gadaffi's rent boy.