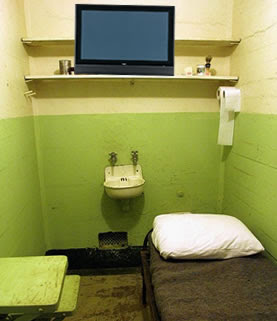 "Apparently Megrahis former inmates at Greenock prison are fuming as Gadaffi had previously paid to give Megrahi Sky TV in his room and under the rules of the prison if one inmate receives a facility then they all get it so everyone was enjoying SKY TV until now."

WTF? Excuse TB while he goes a little hang em' and flog em' but who the hell allowed the Libyan President to pay for Scottish murders and rapists to watch endless repeats of Top Gear on UK Gold?

Surely, by the same rules, every single life prisoner in Scotland who gets cancer will be let out?

No? Didn't think so.

As was pointed out repeatedly, the rule is less than 3months to live, as agreed by two independant doctors, not a diagnosis of cancer.

As for the Sky in the cell, that is a load of b'llocks and whoever agreed to that should get a visit to the shower block

This is outrageous. Who authorised this? The scots are out of control!

What next? - Al Quaida sponsors Glenfiddich?

As amusing as it is to wonder if endless repeats of Top Gear is punishment enough for these miscreants - the question remains:

Would British prisoners in Gadaffi's jails be afforded the same respect?

I think not. So the argument remains to let all the lifers rot.

try reading the comments TB where i debunk this story as not true.
bear in mind i live half a mile from the prison.

Yeah but most of the life prisoners in Scotland aren't INNOCENT.