Though in no way is TB as accurate as someone like err Tweetminster of YouGov at predicting election outcomes, the straw poll released this morning about the old upcoming CF Chairman election has thrown up some interesting results: 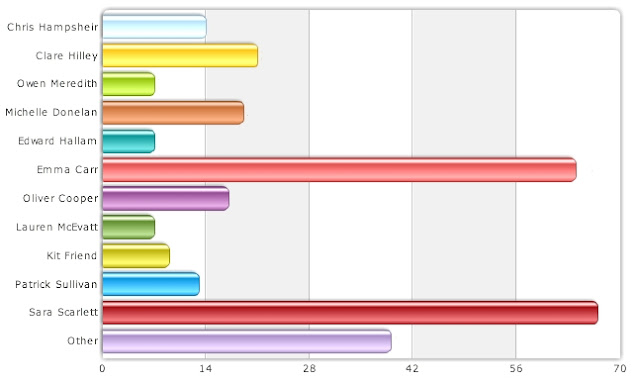 The coalition is deep and strong! Sara Scarlett, a Liberal Democrat libertarian is way out in front despite never having actually defected. There was talk of it once but now the two parties are in coalition what's the point? Something tells TB the old guard in Conservative Future wouldn't put up with it in reality.

In all seriousness TB is up for one lass hurrah in terms of kid politics by covering this election along with Keep Right Online. The lovely Emma Carr seemingly has a strong chance if she were to run. It looks like it could be a big field and the showing in this early poll for "Other" is very high.

A Liberal Democrat take over of the youth wing of the Conservative Party?  What larks.

Clare Hilly is a one woman humanitarian disaster.

TB - it may be that for some readers, as for myself, the name of one candidate stood by virtue of it being the only recognisable one. Due, no doubt, to the countless reports hereon in times past.
I didn't vote as I couldn't remember whether her name was ringing a bell for good reasons or bad. All I could recall was that the stories related to her were entertaining. Oh, how we miss those days...

That's probably an astute analysis, TB. But I don't think the 'old guard' have anything to fear. This wasn't a serious poll because I am not a serious candidate - for obvious reasons...

@headless: I aim to please

Anonymous 16:13 – to be fair, she knows how to win elections, unlike others.

Just think of the banter!

Some of us have been saying for years that Elaine Bagshaw would defect to the Tories.

If so, a Bagshaw-Scarlett rematch catfight for control of CF would be bloody hilarious.

Hahah massive fail on my part - though this would seem to indicate I should run for CLWCF :D

What bull
Emma Carrs puppy sent the following message out last night. Hardly think this poll is weighted with this in mind...

Hi guys
As you are no doubt aware Conservative future elections are probably just around the corner. In the spirit of this our very own Tory Bear has created a poll to see who you would like as Chairman if the election was tomorrow. Now none of the candidates are confirmed but a name that may stick out to you is Emma Carr. At the minute Emma is unsure about standing and would like to see how people may feel about it. So if you think Emma would be a good candidate and a good CF Chairman then do vote, its only takes a couple of seconds and would really help. Im backing her as have seen first hand the fantastic job she has done up here in the North East, the toughest area you will probably find to be a Conservative. So do vote at the link below :)

I think Sara would make a very interesting Tory leader - she's more Tory than most of CF. I'd certainly back her defection!

Although, Emma Carr is much nicer to look at than the current Chairman. Without a Scarlett revolution, I'm tempted.

Remember when the former Federation of Young Conservatives voted to legalise heroin then started a riot at Durham University? Those were the days...