Wouldn't see Gordon this on a random Thursday evening... 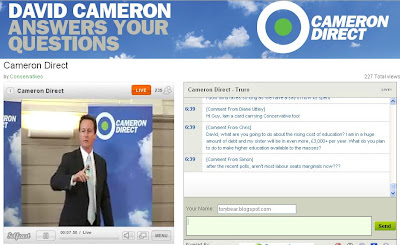 He must have had a shite day but he's on good form and these CameronDirect things are a great idea... (The moderator is a bit of a bitch though, distinct lack of a sense of humour!) 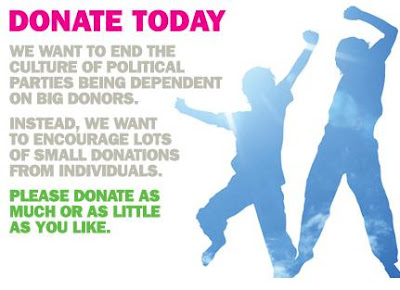 Does Ashcroft donate as much or as little as he likes?

I’m torn, on the one hand you have to respect DD for his decision today to resign – even those it would have angered must have got a little swept in the evocative spiel about the Magna Carta and the CCTV state!

However on the other hand this is a bit of a spanner in the works, that is likely to flop spectacularly if Labour does not put up a candidate. David Davis has taken scalp after scalp as Shadow Home Secretary and the prospective Tory front bench is now significantly weaker. DD was our attack dog who could be relied upon to throw the punches.

I often lament of a lack of honour in this modern age, no great battles left to fight, nothing left to die for, so I can’t condemn David Davis and I will be there on the streets campaigning for him, campaigning against this tyrannical government. However I can’t help feel some reservations and sadness that the Shadow Cabinet will suffer and ultimately the image of the Party as a prospective government, with a leader in control, has taken a big big hit today.