TB swung by BBC Breakfast this morning to discuss the fact that despite being cleared by the Parliamentary Standards Commissioner Nadine Dorries is still being subjected to a vitriolic and partisan hounding online, especially from the more scummy, stalkerish elements of the otherwise maturing left-wing blogsphere. Nadine claimed that she changed the names and locations of constituents she discussed in order to protect their privacy and her own. Funnily enough the BBC though this worthy of their airtime.

The quality is appalling, but someone managed to grab a recording of the discussion with lefty, but a nice one, Zoe Margolis:

Take note though Andrew Marr, not a basement dweller in sight. Though it's that sort of blogger keeping the attacks up. To those that say this isn't a left on right attack are wrong. It's precisely because of Nadine's views, that some might regard as controversial, that the left can whip themselves up into such a frenzy about her. But they are running out of attack lines, and funny how quiet they are about the accused fraudsters facing trial from their own side of the political divide.
Funny though that despite the countless attempts to bring her down, Nadine managed to increase her majority in May. Something that along with her clearing by John Lyons is driving the local Labour Party and freaks many miles away in places like Guildford mad. She remains a popular local MP and would frankly be better ignoring the online nutters...

There are few things more likely to get TB out of his awful blogging lull than a chance to take the piss out of his old student union. Once again Edinburgh University Student Association, or EUSA to their friends, have excelled themselves in their fightback against the machine.

Those evil ConDems are threatening to raise tuition fees. The comrades are being called to arms to fight these evil education cuts. Put perhaps the hacks should spend more time in the library than stabbing each other in the back for their quest up the greasy poll and attempts to find a safe Labour seat or Green Party candidacy: 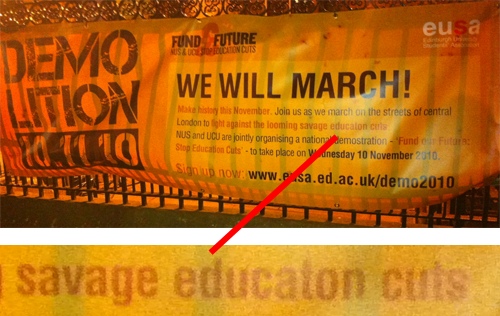 If ever there was proof the 50% target was too high. Labour would be proud after their similar mare.

Best Campaign Ad Ever No.145

A message from Conference Pride which is happening tonight. 21.30 - 03.30 at Nightingales Club, 18 Kent St. Tickets available in the ICC lobby or from anyone clad in a rainbow t-shirt...