Yes TB is meant to be on holiday but while having a cursory look over Google Reader he did have to chuckle when he read the same story on two of Labour's leading blogs published just minutes apart.

During the election, the left made a huge hoo haa about coordinated attacks from the right and suggested that just because Tory bloggers had a beer together meant that it was all a big right-wing inside conspiracy and we all took orders from CCHQ. Which is bollocks, and why half of them don't return TB's calls anymore.

Over the last few weeks its becoming increasingly clear that the left are guilty of the very thing the riled against. Look at what

Political Scrapbook
had to say a moment ago, quickly followed by
Tom Harris
, (a man TB thought above following zee orders): 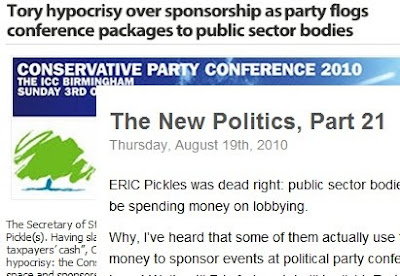 Coincidence? Perhaps, but given it happens so often, TB would be intrigued to see that email (with the link to the
PR Week story
they have both cribbed) that inevitably floated around the lefties... Any minute now Left Foot Forward will claim the scoop.

If you hadn't guessed already by the silence TB is on his holidays...Still

Lots of stuff to catch up with when TB has a moment, but in the mean time you can read an interview with him by the charming Jess Freeman from Total Politics

Hi, My name is Martha and I'm one of torybear.com readers.

I'd like to thank you for the excellent information I've found
on torybear.com, it's one of my favorite readings on the web.

I live in Globe, Arizona where I have the passion to share
with family and friends some tips to increase awareness on
healthy eating and its impact on the environment.

I figured you might be interested in including a guest article
for torybear.com about a new research from the United Nations (UN) that
suggests a correlation between climate change and meat consumption.

Article in form of a little guide with a sample vegetarian recipe
to help your readers experiencing with this topic and perhaps
discuss the topic at hand.

Please, take a minute to consider this; it would be a pleasure
and honor to contribute!

With your support we can educate the public about the dangers of
excessive meat consumption and hopefully contribute save our environment.

Either way, thanks for reading and keep posting your excellent
information on torybear.com.