It was billed as the students of Scotland rising up against the the tyranny of Israel. The socialists were there, as were the hippies, as were two very sinister looking chaps dressed up in full Hamas gear, but in the end the Edinburgh University on campus Gaza protest was a bit of a damp squid. 60-80 unwashed hippies turned out with some pretty half hearted chanting, meanwhile streams of students poured past the protest barely batting an eyelid and in doing so gave their tacit consent to Israel's quest for a sustainable peace in the middle east. 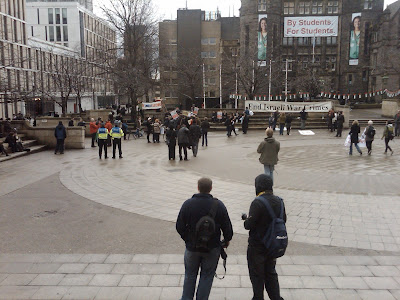 Eight police vans and a mobile CCTV unit, as well as the press, nearly out numbered the students. Instead of removing illegal masks or dealing with the menacing behaviour of said Hamas clad activists, who was it that came the closest to being collared by the law? Well the tiny minority of pro-Israeli students that were quietly watching. TB and a few friends stood quietly on the sidelines as the mentalists raged against a global Jewish conspiracy and when one person chose to display a simple but effective Palestinian flag with the words "Fuck Hamas" written on it, the police had a hissy fit. Grassed in to the law by the guy running George Galloway's rector campaign an argument about free speech soon erupted between TB and co and some very gruff coppers. Apparently it was this that was breaching the peace and not the hoard of terrorist loving scumbags that were yelling outside a library.

Lothian and Borders police should be ashamed of themselves. In response to TB's suggestion that freedom of expression was apparently still alive and well in this country, PC plod replied - "well I don't like swearing." Since when was the law in this country determined by the will of an individual copper?

absolutely, high time the Big Tent Rat was deselected - Tory majority of 18k and supporting the fucking Labour party at every available opportunity ...