There are a couple of interesting polls on PoliticsHome today. Firstly it seems that the people agree with George Osborne that Labour are

not a progressive party
and it's them who are desperately clinging to a broken past, and secondly an interesting poll about
legalising drugs
: 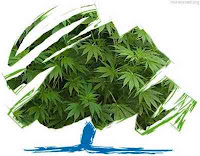 TB is slightly disheartened to see that the old fuddy-duddy authoritarian Mail-esque tories have dragged the budding libertarian wing of the party down. TB finds it hard to believe that there are proportionally more Labour voters who want to relax Britain's extreme drug laws, but then again it shows just how out of touch the Labour leadership is with their members. Frankly TB doesn't give a flying fuck what you smoke, inject, snort or drink, it's your choice and your responsibility to pick up the pieces. He has some hope that the next generation coming up the party ranks are noticeably more libertarian - those currently in charge of Conservative Future certainly are, but then again the age old saying will probably come in to play.

A conservative is a libertarian with daughters.

At last, tb, something we can agree on... But I'd argue you don't need to be a horrid libertarian to oppose prohibition. You just need to recognise that it does nothing to cut use, and everything to fund crime networks. Many people who support legalisation are those who see the problems most and recognise that the war on drugs has been counter-productive: prefominantly labour voters. Do come say hi if you're passing through oxford...

Libertarian is the way to go people! live and let live.

You don't like to concede that some people simply don't have a backbone and will aimlessly drift into drug taking and other unpalatable lifestyles; nor take heed of the correlation between drug use and serious users' dependency on others to sustain it or pick up the pieces. It would be fun and dandy for us all to get high regularly but there is a massive social and economic cost which you handily neglect to mention. Also, whilst we have a socialist, unaccountable health system I'd rather our laws correspondingly have an authoritarian approach to drugs, so there is some contrived manner of personal responsibility when it comes to their use.

Libertarianism is excellent for those who can stick to the very vaguely drawn lines of principle, but smothered by those who are just that little bit too selfish.

If anything, rather than question the grassroots, maybe you should be wondering if you yourself are in the wrong party?

I don't mind which way they go, as long as they're all treated the same.

The main reason for outlawing most drugs seems to have been to give the over-powerful tobacco lobby a virtual monopoly — there can be no other reason, looking at the way matters lie.

Of course, I'd still expect freedom from assault by others' fumes, just as much as freedom for the druggies (including tobacco druggies) — ir is this to be one law for their "freedoms" alone?

Oh do grow up.

As if things aren't bad enough lets have evryone caned. Too high to operate, hallucinating soldiers a la Vietnam, coppers stealing to fund their habit...

As with all things it is a question of balance. Legalise the lot and you wouldn't be ABLE to pick up the pieces.

"Frankly TB doesn't give a flying fuck what you smoke, inject, snort or drink, it's your choice and your responsibility to pick up the pieces."

Exactly. Plus, legalisation = more education, the likelihood of drugs being used safely (more needle exchanges etc) and, perhaps most importantly, a greater understanding and control over where drugs are imported from and the conditions that the drugs are grown and processed under. It would cut out not just the British criminal gangs dealing the drugs, but hopefully also the Columbian gangs using forced labour etc to make cocaine.

My personal opposition to drugs has never really come from any kind of "drugs are BAD" knee-jerking, but from the fact that I don't think my commitments to free markets, individual freedom and liberty sit very well with supporting an industry that 'encourages' people to be more productive by pointing an AK-47 at their heads.