She has a name that sounds like it could have been made up by Private Eye, and now it seems that Grace Fletcher-Hackwood has had her

Twitter profile hijacked
. "Hackbitch" as she is commonly known since she had to resign from her job responsible for welfare on campus after she
hit a student
, is one of Kerry "Twitter Tsar" McCarthy's minions, who along with the likes of "
Bevanite Ellie
" (who is kinda cute incidentally,) have given the tories hours of amusement with their fem-nazi, party line devotion and hysterical partisan rantings. It wasn't going to be long before someone started to mess with them: 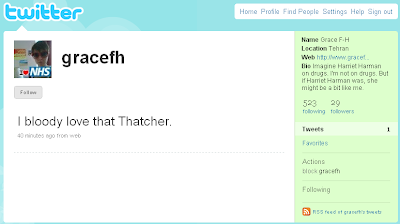 Seems the real Hackwood
changed her name
on Twitter (she has a habit of this in real life too,) and someone dived in and claimed the old one. You may laugh at her ridiculous joke bio; "Imagine Harriet Harman on drugs. I'm not on drugs. But if Harriet Harman was, she might be a bit like me." but no, no, she really did say that.

Harriet Harman and this lot could probably do with drugs of some form. Calm the little dears down.

Tip of the Hat to TB's man in North Briton for pointing it out.

Something you should read ...

Amongst other things, it shows how 700 rapes are turned into 70,000 by people like Harriet Harman in order to pursue their own ambitions.