A New Editorial Stance at LabourHome

It had been a while since Tory Bear drifted over to

LabourHome
and he only found himself there after his google alerts noticed that his televisual sparring partner Alex Hilton had decided to have a little go with some pictures he found of TB is his more refined university days. The last time TB saw that photo used in an attack, it came from Draper's office. Nice.

Anyway to cut a long story short, when TB registered to leave a comment he found there was some fun to be had: 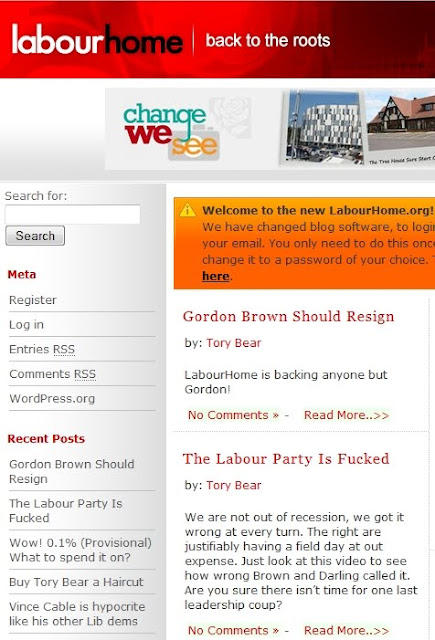 UPDATE: 12.24: Ah after an hour of fun, someone has clocked what was going on. Fun and games over.

Took them a whole hour to fix it

"scottspeig said...
I especially like the "buy Torybear a haircut"!"

I'm not sure that Labour party funds would run to it.

I must admit the photo of the good bear used looks rather like Horatio nelso Stick on a big hat and an eye patch and say "I see no smear!"

If George Osboure ever becomes Chancellor, we're all fucked.

If George Osboure ever becomes Chancellor, we're all fucked.

Spot on, Paul. This Osboure is as little known as that rich slob, Bliar.

It was funnier when Torybear did it as a blog post at LabourHome though. It was also true which compounds the amusement in these types of cases.