Will Blog About Something Else

After this quick update...

Fall out from Kerry Out campaign has been exactly as predicted. Lots of support and some serious tantrums from the usual lefty crowd. They are in border line hysterics.

TB isn't too surprised by the

reaction of the Bristol Evening News
- a Labour source confidently informed TB yesterday that "Kerry had the local rag..." What is hilarious however is the press release TB put out yesterday suggesting Kerry would resort to moaning about sexism and surprise surprise...


Labour MP Kerry McCarthy has described the Tory bloggers behind an internet campaign to oust her from her Bristol East seat as "bully boys". Ms McCarthy, who is her party's new media campaigns spokeswoman, said the attacks were personal rather than political. She said she had tried to avoid responding via blogs or Twitter but told the Evening Post: "These people are deeply unpleasant and misogynistic.


The deeply unpleasent feeling is mutual. The comments are pretty funny too: 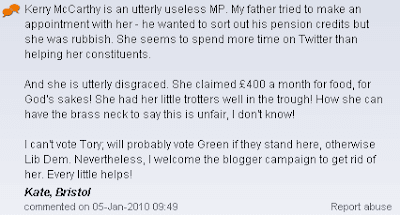 The Evening Standard
went with this
. More media coverage is expected today and local TV when the KerryOut bandwagon rolls into Bristol soon.

In defence McCarthy has set up a super dooper social media campaign in the form of a Facebook group... hilariously she is pictured wearing a life jacket. Waving not drowning eh?

TB had to chuckle at this too:

Poor Gus - he should know by now that it's hugs & kisses not lots of love - bloody students.

In her twitter role which Tsar does Kerry base herself on?
Personally I favour the view that the lovely Kerry bases herself on Ivan Grozny and her Labour followers on twitter are her Oprichniki.
Sadly for her the reality is probably rather different and her situation is more akin to that of Nicholas II in January 1917.

Can't you start a campaign to get Ed Balls out ... and if you make it a double with his awful wife, I'll certainly contribute.

is this kerry out thing legal? how do people declare political donations? are you checking them for being on the electoral role and for meeting all the other legal requirements? surely it's illegal to pass donations through one party to another without full disclosure, otherwise isn't this like that labour abrahams bloke who got pwn3d?
watch out TB. make sure this is legal bruv

all checked with lawyers,

How can #kerryout be misogynistic when we are trying to get a different woman elected?