Labour and their supporters really are getting desperate. Take Tom Callow for example:

Apart from bearing an uncanny resemblance to a Swan Vesta, the only other amusing thing about this chap is his Prescott levels of delusion as he attempts to attack any opponent to Gordo. 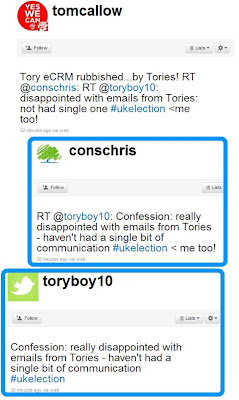 Yesterday this PR bod and Labour activist was violently off message and spent the afternoon smearing Mrs Duffy as a racist and xenophobe, the evidence of which is plastered across his
Twitter page
. Ouch, such outspoken activists are hardly doing well to help the desperate crisis management team flapping at the top of his Party.

Now Callow has decided it would be a good idea to create some fake Twitter accounts and begin Tweeting attacks as a fake Tory member. "Con Chris" and "Tory Boy 10" have appeared out of nowhere. They have only ever been mentioned by our matchstick man. A laughable attempt for someone who claims to be an PR expert.

TB wonders what if perhaps there was a more productive use of his working hours for
Automotive PR
and their clients...

UPDATE: Seems Callow has already protected his Twitter page on the back of his story. Don't worry, the whole thing has been saved at this end. Nothing to hide, nothing to fear...