What the hell is he playing at? 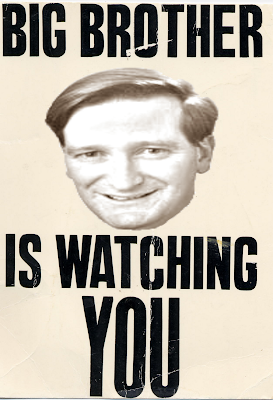 Our esteemed Shadow Home Secretary is putting a bit of stick about today. He apparently speaks for all the party with his desire to give the police the power to:
-Use covert video or listening devices in premises or vehicles.
-Watch premises to identify or arrest suspects.
-Conduct visual surveillance of public locations.
-Patrol, in uniform or plain clothes.
-Use thermal imaging and X-ray technology.
-Conduct surveillance using visible CCTV cameras

TB nearly choked when he read this, he expects this sort of quasi-fascist big-brother bullshit from Gordo's lot but not from our side. Plain clothes goons on the roam? Doesn't this all sound just a tad
familiar
?

Even before Grieve has got his black leather gloves around the nation’s throat, there are already 266 separate provisions granting the state power to enter homes without permission, how did we let this happen?

Our Party should be the ones fighting this. Today's speech made a mockery of the DD4Freedom campaign.

We should be fighting the fact that innocent people have their DNA held on a database for criminals. We should not accept or that there is one CCTV camera for every 14 people. Or that you are photographed boarding a domestic flight.

We should be wrenching the microchips out of our dustbins, spray-painting CCTV cameras and standing up together against this dominance of the liberal-fascists. The legislation that outlaws the right to stage a silent, one-person protest within one mile of the would not be much use if a million people turned up.