Archive - Exclusive "This isn't about George, or you, it's about the Labour Party"

TB had great fun covering the Rector election in his last term at Edinburgh. If anything just to be able to stick it to Labour and Lord George Foulkes on his patch every day. This one story gives the best background and most damaging intervention by the Scottish Labour party into what was essentially a student race. First published 30th January 2009:

Tory Bear has said it before and will say it again - the Labour Party from the very top, to the grassroots is in a pretty desperate state of affairs. Now you may have noticed that TB has been focusing somewhat on the Rectorial election at Edinburgh in the last few weeks and though some have suggested this isn't exactly high profile news, one campaign in particular has flagged up some fascinating insight into the inner workings of the Scottish Labour Party. Party elder Lord Foulkes has had a colourful career and is now looking to settle into a cosy retirement as a member of the Edinburgh establishment. However things aren't going exactly to plan.

Despite being the first candidate to declare, his campaign has got off to a rocky start and has only began clawing back, in terms of impact, in the last couple of days. The campaign team is dominated by members, past and present, of Labour Students but it seems that not all of them have been fully on board from the beginning. TB's sources tell him that it has taken some serious heavy handed techniques from the highest echelons of the party to whip Foulkes's team into shape. It has come to Tory Bear's attention from sources close to the top of the Foulkes campaign that a particular member of the Labour Students was taken aside in the Scottish Parliament and threatened not only by Foulkes but by Iain Gray, the chaotic leader of the Labour Party in Scotland.

TB understands that the individual in question, though a very active member of Labour Students was not happy to support Foulkes as he did not agree with his voting record or outlook on key issues. However Mr Gray can be quiet persuasive it seems: "It'd be a shame if you're career ended here" he apparently said, adding "George is very important in Scotland, and he has a long memory..." The individual in question, for the sake of their career, has now bitten the bullet and is signed up to the campaign under sufferance. No doubt "This isn't about George, or you, it's about the Labour Party" can be a forceful message when whispered in your ear by the Leader of the Party. 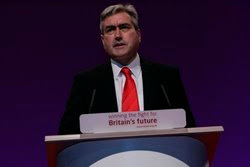 As one would expect Gray's not so charming gate keeper denied the story as "nonsense" but there was a slightly more chaotic and nervous reaction from Foulkes's office when TB put this story to them earlier today. (This is what happens when you employ students to run your office, as is seemingly the case with Foulkes's continued employment of Matt McPherson, his campaign manager. If that isn't the case then TB wonders what Mr McPherson is doing answering the phones in an MSPs office.) However both Gray's office and Foulke's henchmen refused go as far as to call TB's source a liar. McPherson stated "I can categorically assure you that no one from within George's Rectorial campaign team has ever issued a threat to anyone." but gave no comment on whether anyone above the level of student team, someone such as Mr Gray had been involved...

Foulkes expected to walk this election for Rector and now that things are not going his way he is calling in favours from his high powered colleagues. The quotes may be dismissed because they are anonymous but Tory Bear is protecting someone who, having been threatened before, isn't too keen on rocking the boat too much. TB is however willing to vouch for the authenticity of the source and has spent the last 24 hours checking out the story. For the leader of the Scottish Labour Party to be putting a bit of stick about, to be bullying members half his age and twice his integrity shows once again just how stale and tired and nasty the Labour Party has become.