This email from a co-conspirator says it all:

"That list of seats for CF to help in is bizarre -- it doesn't include two former National Chairmen (Hannah Foster in Exeter & Cllr Justin Tomlinson in Swindon North), a former Deputy National Chairman (Cllr Andy Stephenson in Pendle) & a former elected CF NME member (Chris D. Kelly in Dudley South)! Swindon North, Pendle & Dudley South are all in the top 75 target seats against Labour whilst Exeter is target 176 according to the
ukpollingreport
"

Maybe if the Steering Committee had consulted the Chairman and NME they would have been told this...

We may very well think that, but he couldn't possibly comment...

Michael Lunn - the only member of staff for Conservative Future in CCHQ has an approval rating of just 19.2% amongst CF members. 35.9% of those surveyed had no idea who he was or that they could contact him and 44.9% say they are unhappy with the way the job he is doing for the members.
There were serious concerns raised in the survey about the "Youth Development Manager" - (£35,000pa) . Obviously there was the expected; "The stuff about Hilley was a disgrace and he should have had the good grace to fall on his sword." and the standard; "no contact, never seen/heard from him."
However more alarming was the outrage felt about the decisions of the CF "Steering Group". This consists of Justine Greening MP- the Party's Vice Chairman for Youth, Mr Lunn and George Eustice- the former head of Press at CCHQ and now, well something in DC's office. Obviously the role of CF is to be the foot soldiers to the party machine come election time, but with a complete disregard for their views Mr Lunn has forced a list of 16 target seats through the Steering Group and imposed it on the membership, without consultation with the Chairman or the NME. Requests for funds for any activity in other seats are turned down and this included a complete refusal to provide accommodation for the countless CF members who decamped to Crewe and to Henley for weeks on end. Tory Bear understands that members of the NME who do not wish to be named spent a significant amount of their own money in providing support for by-elections and other activities. It seems as if the NME are trying to down-play this fact and "campaign funds" has been a euphemism for some time for personal spending. A number of people have raised this fact with TB. This is frankly a disgrace.
Tory Bear got in touch with Mr Lunn to ask him to spread some light on not only the fact he is terrible at responding to members but also about the target seats issue;

In a charming manner he replied "Thanks for your email. We have discussed it and in answer to your question we do not accept your online survey and do not comment on media speculation about target seats."

Well you may dismiss it as speculation Michael, but you know these documents are real: 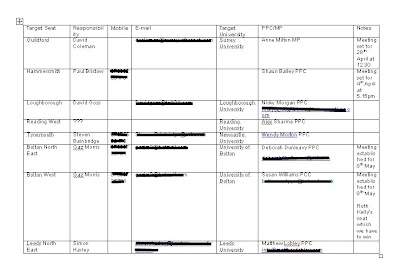 There is enough
speculation
going on about how these seats were chosen (not only in the comments on this site but elsewhere,) so TB is not going to add his own two cents. Granted CCHQ have every right to tell the media, in whatever form to piss off, so TB urges any member who wants to know what exactly it is about these 16 seats that makes them so special to email michael.lunn@conservatives.com and ask him yourself.
Surly he will answer to the members?

In his capacity as a member of the Conservative Party TB's alter ego has written to the Party Chairman before to complain about the appalling disregard CF is held in and would have no qualms in doing so again.
What right does this unelected official have to dictate where CF can and cannot campaign or how the CF budget is spent. These are decisions for the elected Chairman and NME.
A totally unacceptable abuse of power
once again
from Mr Lunn.

NB: TB has been trying to get hold of the National Campaigns Director for the last 24 hours to discuss issues relating to this list and whether he approved it. Has he disappeared on one of legendary jaunts to foreign lands otherwise known as Nottingham...?