TB rarely likes to admit that he is wrong but sometimes you just have to be the bigger bear. Last night started out as a typical Friday night - but as the local kicked out TB and the crowd were wondering what to do. Having fought going to see Mamma Mia at the cinema, the DVD that 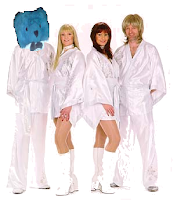 Mummy Bear hid at the bottom of his suitcase suddenly seemed like the best idea ever...

So with chocolates and a fair amount of vodka, seven of us huddled around the TV getting about two and half minutes into the film before spontaneously bursting into song for the next hour. What a great film. TB takes back anything he said and sorry
Mr Dale, TB now agrees
.

Then tragedy struck, the dodgy Russian DVD conked out half an hour before the end so TB and his equally cynical
flatmate
are still desperate to know what happens...