Will Scotland survive this?

In more respecatble days she would have resigned already, but you would think this has to be the last straw: 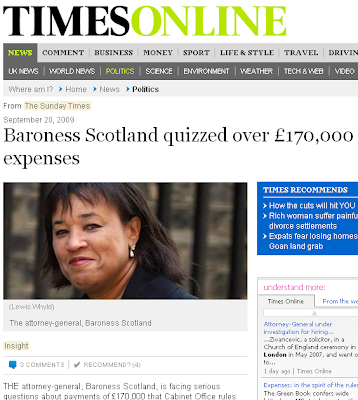 However the slippery tendencies of this government and their near inability to ever fire anyone, let alone ask for a resignation, means Scotland will probably try to fight it.

It is very interesting to note however that the Cabinet Office have come out fighting very quickly. The acid tongue of Liam Byrne is not one any politician would like to fight, even if you are the Attorney General. The illegal immigrant situation is dependent on an inquiry, it was bad yes and it is not over yet, but this new secondary scandal taps right into the public anti-expenses/greed rage.

Some might say there is a definite prima facie case to answer but lets see how Sunday/Monday plays out...

TB reckons she could be toast.