Enviromental protesters complaining about something have attempted a rush on Parliament.. The plan was for them all to descend and try enter at the same time.

The footage is pretty cool... 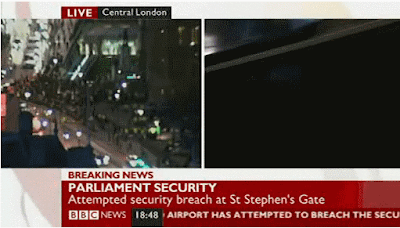 TB's parliamentry source says all staff were warned by the Sarjeant of Arms:

On Monday 13th October a number of environmental groups are associating themselves with the 100th anniversary of the ‘Rush on Parliament’ by the Women’s Sufferage Movement in an event entitled ‘Climate Rush’. This will involve a demonstration on Parliament Square during the afternoon and a planned ‘Rush on Parliament’ at 6.00 pm.

A number of security measures will be implemented in order to maintain access for Members of both Houses and to mitigate disruption to Parliamentary business. Some of these - such as increased police presence within and around the Parliamentary Estate, a heightened search regime and the closure of the Victoria Embankment and Derby Gate Library entrances all day on 13th October – may inconvenience Members and staff. We would be grateful for your understanding.

It seems the heavy police prescence seems to have held off the hippies.

They are using old school castle security by barracading the doors with planks better get a tank next time...