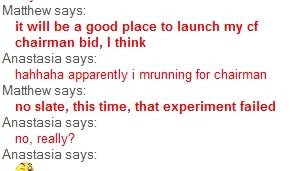 Good for him, the fightback at last starts.

I think if this is real the last person he would tell of his plan would be ABB!

what I want to know is the beginning of the conversation which is not shown...when matt says "it will be a good place to launch my...bid"

Given the CF Elections are no doubt well over 12 months away, is it not both pointless and meaningless to speculate at this juncture on who the next CF Chairman will be.

You get two cf-ers on msn, all they need to do is change their screen names to Matthew and Anastasia and there you have it. Mystery over.

but why would TB lie to us

That is great news, Matt is a towering figure in CF and one who has shown 100% commitment for many years.

The huge lack of national campaign days, the bullying of anyone who has a differing opinion and the cushy branch elections that exclude anyone who is not part of Michael Rock's inner circle has left CF a laughing stock.

Matt is the only candidate that can give the power back to the people.

Hold on here people calm down, it was me, Anastasia, Matt, Tory Bear and Alex Swann on msn last night, and it was all jokes and fun.

No hacking by the Bear, we all have the screenshots ;-P

I believe there are a number of things that were said last night that would make headline news on here...

there's no mystery at all.

abb and matt have been getting very cosy recently and matt is definitely standing. he's been persuading her to join his campaign committee which is quite a good move as she's got all the gay votes.

his opponants so far are patrick sullivan, ed hallam, nick webb and owen meredith. christian may was going to stand but as matt's going to he probably wont- the right don't want two candidates fighting over their votes as it will split it.

also heard that daryl williams might throw his hat in the ring for a fourth time but don't know how true this is as it came from a bad source.

blaney banned christian from standing after the embarassment of shane greers involvment in the truely dreadful forward together campaign.

if richardson is going to have another crack he needs a fucking good team.

the likes of abb should be the last sort he should have on board. trust is everything and having a slippery two faced amateur would not be a good move.

he needs to pinch the core rock supporters if he wants any chance of winning.

oh and like fuck scary hallam has a chance of winning. or owen "special needs" meridith.

patrick- yeah i can see it.

oh god can you imagine.

What about the other names thinking about it, Adele Douglas, Clare Hilley, Alexandra Swann, James Moreton?

sullivan is writing his manifesto which will go online soon

hallam's campaign is well underway and rock sees him as the natural successor for CF.

rock has been calling up/mailing anyone who dares report anything negative on Hallam and then reporting them to DC and the board to get them black listed.

This domain was registered last week:

moreton would be an idiot to run... there are waaaaaaaaaaay to many skeletons in that closet.

wouldn't want that dirty little incident to come back to haunt him now would he?

anonymong 18.09 - that is the biggest load of rubbish TB has ever heard.

I hope I actually get a ballot paper next time round....

Richardson would have won last time without Daryl's intervention.

If Hallam is running thank god I am leaving the country! In this day and age image is everything (though needs to be followed up with substance) and he is NO IMAGE!

It would be mortifying!

Ed works so hard though he deserves it

I reckon Tory Bear should stand. It would be amusing if the roll call of Chairman went Bristow, Vaughan, Ckarke, Rock, Bear...

Hallam isn't running, he has gone on record with this.

Are you actually joking - there's not a chance in hell I'd ever consider running. God no!

And yes the conversation was real and rather amusing.