"There will be no Working Life conference this year. We will be looking to hold events later in the year, but the cost and lack of interest in working life conference last year, means we are not going ahead this year.
However, we will be ‘re-launching’ Working Life shortly. The question is, what exactly we will be re-launching? That is where you come in. I firmly believe CF is at its best when we operate as a member led organisation, so I will be taking my led on Working Life from you - the members" writes Owen Meredith on the
NME blog
. 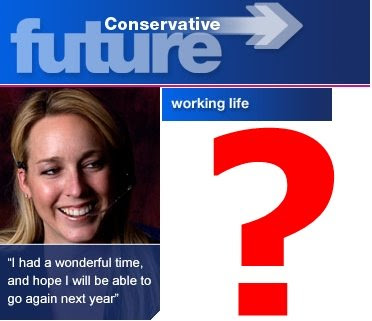 Over the last year the rumour-mill has generating all sorts of banter about last year's
cancelled conference.
Senior officials claimed to the incoming NME that that Party lost "thousands" through the cancellation, but TB has been talking to a source close to the former Chairman who has shed some light on the matter- "...there was literally zero support from CCHQ for the entire time I was on the exec." The conference was cancelled at a cost of £600 due to the fact that despite an impressive range of speakers, only eleven people applied. ("
There are still some places left!
" haha!)

It is reassuring to know that the the web address
www.cfwlconference.co.uk
is clearly still owned by Conservative Future however the main reasoning behind this post was a call to arms more than anything. Member retention after university and increasing membership of those aged 25 to 30 is a vital part of CF's role. Something has to be done.

Owen's post gives more than a smack of desperation.

If you feel you can help, why not get
in touch
? Whatever the reasons for lasts years cock-up - and it doesn't strike TB as a lack of effort, the same mistakes can not be made again. TB fired off some emails on this subject and the response from those who should be keen Working Life members was not exactly a resounding thumbs up;

"it's been 6 months since they started, I am a young professional in London and this is the first time I have heard from the NME on working life...and I bet I'm not the only one."

Let us not forget that Karen Allen failed to get re-elected to the NME after taking the poisoned Working Life chalice, having previously topped the ballot.

Better pull your finger out Owen, you were 33 votes from the top...

He doesn't really seem to do much, does he, Owen?

Richard, Owen works his ass off, but not all the work done by NME members is going to be high profile is it?

The freshers' packs for one, which look far better than previous efforts.

Since it seems the oldies aren't attracted to a conference idea even when they've been segregated from the kiddies wouldn't it be worth giving a student conference a try? Or even, god forbid, a whole CF conference? Rather than ring our hands over hanging on to the young professionals who aren't rich enough to donate big sums and are too busy to spend all their time leafleting how about we put on a bit of a morale boost for the foot soldiers of the party? Students and kiddies need encouragement or else they aren't going to do all the hard work walking around the country when it's needed.

Ah yes. Matt Lewis. Watch him, Wales and Meredith come election time. Unbridled ambition there, unfortunately, and as so often with CF, it is inversely proportional to the ability.

*shock horror* even bostick reads this blog...TB you should be so proud

Emailed Owen a whole host of reasons why it didn't work last year and what people of 25+ are interested i.e. look at the success of the breakfasts that Karen Allen organised under Working Life and now under CWF. Small, exclusive gatherings with senior officials.

Working life has never really worked on a scale bigger than City Branch.

I don't know why you are so opposed to Owen asking people what they want Working Life to be. Seems like a sensible idea.

There has never really been sufficient "critical mass" to do WL properly outside London. I think the best that could be done is for some sort of regular event programme in London a la the excellent breakfasts mentioned above, and the rest of the country handled on an ad-hoc basis.