Remember
when that plane fell out of the sky above Heathrow in January? 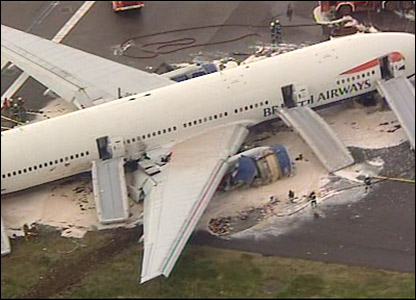 Well today the official report blames ice in the fuel
. A previously unheard of problem...blah blah... Tory Bear can reveal that the real reasons this happened was because Gordon Brown was on the way to China and his motorcade drove under the approach path of BA038. TB has it good authority that his car had recently been installed with a brand new security system which utilised a RF transmitter to block out any mobile phone triggered bombs. These systems can have up to a two mile range and it apparently caused the Boeing 777 EEC’s (electronic engine controls) to sense a “over-boost” situation, thereby commanding a reduced-thrust situation for the engines.

"This gets weirder. The PM's motorcade was coming up the A4 as the plane approached and at one point his detectives grew alarmed. The suggestion is the stricken Airbus misjudged its approach and nearly took out the PM..."

Having originally been sceptical about this story TB commented that it could have been a bird flying into the engine. His contact had this option covered though -

"Yeah but there were no feathers"