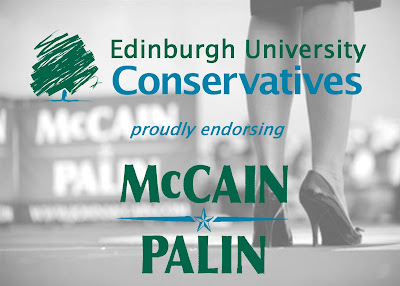 It with great pleasure that the Edinburgh University Conservatives would like to officially endorse your ticket for the President and Vice President of the United States of America. Though the nearest American city is over 3,000 miles away we can assure you that we at Edinburgh University have been following closely the developments of this most interesting presidential race. It saddens us to see the amount of popular support your opponent receives, both in America and abroad, as we experience daily the infringements and wrongdoings of a strong, leftist state. We can only hope that the American people look to their history and realize that only a President McCain is capable of ensuring the protection of those liberties and values that, born here and matured in your great country, are the pillars of Western liberalism. On behalf of the Edinburgh University Conservative and Unionist Association we would like to wish you and your campaign all the best in these final weeks.

In a move that will no doubt cause controversy on campus, the Edinburgh tories are once again raising their profile in the student press. Along with building a very effective flying campaign squad designed to aid the five Edinburgh city candidates, edconservatives also have a highly efficient media team.

'It really disturbs me how blindly people support Obama in this race, a man who not only has ties to a domestic terrorist but who also was a registered member of the New Party, a front for the Democratic Socialists of America (before, during, and after his Senate campaign). What disturbs me even more is how people are blaming the Republicans for the current financial crisis. It was a Democratic president, Jimmy Carter, who brought in the Community Reinvestment Act forcing banks to lend to high-risk individuals. It was a Democratic president, Bill Clinton, who enlarged the CRA in 1995 allowing for the securitisation of CRA loans that included subprime mortgages. It was the Democratic Candidate for President, Barack Obama, who in 1994 was involved in a lawsuit against CitiBank for not issuing enough subprime loans to high-risk individuals. It was the Democrats who blocked Bush's efforts in 2003 to create a new department within the Treasury to supervise Fannie Mae and Freddie Mac. And it was the Democrats who blocked John McCain's attempt to introduce similar legislation, the Housing Enterprise Regulatory Act, in 2005.'


All coverage is good coverage eh?

Tory Bear urges all other unversity branches to get writing to McCain...

It's the duty of UK political parties to stay publically neutral in foreign elections, so we can we with whoever wins!

I'm sure many would like to see a McCain victory, but public endoursement isn't a sensible move!

well if Boris can get away with it then I doubt anyone is going to care about a campus association chairman.

As much as I'd like to support McCain/palin I cannot, his choice of VP throws his mental balance into serious doubt.

Being a Creationist(or Intelligent Designer if you want to be pedantic) shows that this woman is quite simply a ridiculous fool who would be a danger to the world if she had a larger platform.

I would also like to point out that I'm not that enamoured with Obama.

I would also like to point out of course that there is not a huge correlation between British party politics and American.

This must come as a great relief to McCain :¬)

The Ed Conservatives web-page actually "endoses" the controversial Republican ticket:
they may need it!!

- and am baffled by those who say there is no correlation between parties on either side of the pond,
because there is still an ideological gulf between the Right and the Left in both systems, one which ought to be driven wider and exploited by a newer generation of conservatives on both sides.

Read the excellent(ostensibly pro-Obama) book From Promise to Power by Chicago journalist David Mendell to appreciate how narrow Obama's true motivation is, i.e. a narrow section of the African-American Democratic caucus.
Too narrow to run a complex society, and the world's most powerful country!

I just think that the priorities of the american right differ wildly from the priorities of the British right. For a start we don't let ourselves get bogged down in religous dogma (Dories and Leigh not withstanding).
I'm not saying we don't have some similarities but on many issues our politics are just too different.

from my own personal point of view, and I love to labour a point, I would find huge difficulties backing a party which in many ways still bases it's religous views on a literal translation of the Bible.
I'm not saying there are no right minded people in the republican party, I just think they allow themselves to drowned out by the illiberal, ill-educated, ill-informed and above all fundamentalist "Religious Right".