TB caught up this morning with Christian May from the Young Britons' Foundation who offers this insight into their 5th annual conference at the weekend.

This year's YBF5 was the best yet. Nearly 100 activists (including three former National CF Chairs, a host of seasoned CF activists and loads of new faces) were joined at Wellington College by leading figures from the Conservative Party and the wider conservative movement. Highlights included:
- David Davis talking about the importance of freedom and liberty
- Iain Duncan Smith passionately reminding us why social justice is a conservative priority
- John Whittingdale OBE MP talking about his memories of the Thatcher years at the Eric Forth Memorial Dinner
- Douglas Murray delivering his chilling assessment of the state of the world
- Eric Pickles talking frankly about public sector language - apparently the only stakeholder he has any time for is Van Helsing

- Iain Dale's media training
- Matt Richardson, of YBF's Legal Support and Advice Unit, talking about how YBF's legal team can help you out on campus.
- Ed Vaizey stressing the importance of 'appearing normal' to the public
- Nigel Evans reminding us to never, ever give up
Feedback from the attendees has been really encouraging - showing not only an increase in support for YBF but for conservative politics amongst the youth in general. Here's a sample of the comments:
"My impression of YBF has very much improved - I am now an evangelist!"
"I love you guys!"
"YBF is going from strength to strength."
"My impression has really improved - morale here is brilliant."
"This was my first YBF event so I had no idea how organised YBF would be. Having been here for the weekend I can say I'm really impressed."
"I've always had a high opinion of YBF but it has improved due to the high quality of the whole conference."
"I'm inspired. Very impressive speakers, friendly people and great fun."
"I had very little knowledge of YBF before this weekend, but have been hugely impressed by its ethos and the work that it does."
"The conference exceeded all expectations - the speakers were brilliant."
"I'm new to YBF so wasn't sure what to expect, but I've got a lot out of it and have really enjoyed it."
There was also a lot of interest in YBF's Summer 2009 USA Conference Tour. Details of this are to follow. 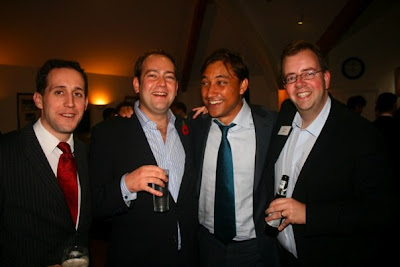 Donal and I would like to thank all those that attended and helped to make this weekend the success that it was. Plans are now coming together for YBF's Christmas Party. Watch this space.

Looks like a great weekend, wish I could have been there.