As TB gears up for the Glenrothes result he is watching Question Time.

Already 20 minutes in someone has called Nigel Farage a racist for absolutely no reason and David Dimbleby has confused a man and a woman. DD has to go soon- after his poor performance over election night the other day he surly can't be allowed to do the British elections ever again. 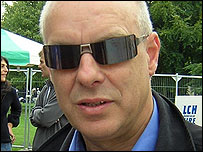 TB has one question though. What is with the ridiculous idea of having a "celebrity" each week on QT? TB is fairly sure that no one in this country gives a damn about what Brian bloody Eno has to say about Obama, Bush or the Swiftboat Veterans for Justice.

Why does anyone care what this washed up ageing hipster has to say. Why should we pay tax to listen to this idiot spouting his views that have been warped by years on drugs.

It used to be fun to watch Question Time to shout at the telly...

These days it's just unwatchable...