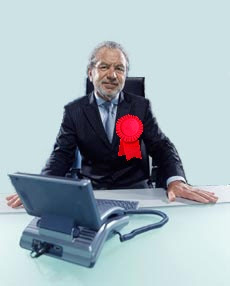 Is
this
Alan Sugar's first move in  an attempt to become the Labour candidate for London Mayor in 2012?
He is apparently going to be fronting a government campaign to get more people into apprenticeships. While TB doesn't dispute that this is a good move and the sort of thing the government should be doing, he can't help think the Sugar part is slightly suspect. While no mention is made of whether he is being paid, Sugar is clearly cosying up to the Labour hierarchy...
TB can't see why, at this rate for Sugar to attempt to join the dying days of New Labour, would be like getting a last minute ticket on the Titanic. People love to hate him but Sugar is a bright guy and sharp. It would be an interesting fight with Boris but TB suspects the national swing in 2012 will still be in our favour, if everything goes to plan with a 2010 election.
BoJo shouldn't be too worried at this point.

Might Sugar be someone who has no deep rooted political loyalties but simply chases whoever he thinks is likely to win for reasons of his own? I remember him speaking at a Conservative rally at Wembley Conference Centre on the eve of the 1992 general election.