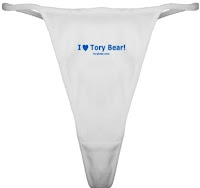 As the carnival of embarrassment that was the Liberal Youth Chairman elections is wound up, TB thought we should all have a little competition to end things. For your chance to win a I ♥ TB thong just be the person to correctly guess the results of the election in the comments section below. Obviously include some sort of name...

So whether you think it really will be poor Liberal Youth and Elaine has spun enough to cling on, or Sara will break the age old curse of the one who wields the sword never wearing the crown, have a guess to the nearest few votes below. Don't forget the mysterious Ali candidate who never campaigned or the Re-Open Nominations option.


It's been a long old slog for the girls, with some ups and down and TB is glad to have done his part to aid the democratic process and accountability. The voting closes tomorrow and TB will try get you a result as soon as possible, though he understands some attempts are going to be made to try send him he wrong results, (oh those pesky Lib Dem kids and their sense of humour!) So will let you all know as soon as he has a definate confirmed result.
Good luck.

If I win your competition you can keep the thong Tory Bear, not sure it would fit me!

Sara will take the poisoned chalice by just 10 votes.

I think its too muddy to call.. likely to be elaine, could be sara or just as easily RON.

RON to win, with Elaine second

p.s. If I win the thong can it please be in a generous size

If recent experience is anything to go by, when they announce the results it will go..
"And the winner is SlumDog millionaire"

Elaine will win by 50, Ron second.

The combined RON and Mr Ali vote to secure at least 10% of the FP vote. I suspect it will be closer to 20%. Probably not as high as some people are predicting/fearing/think it deserves to be. Elaine to be in front by 25 votes or so after first preferences have been counted, but it will be very close. I assume this election is PR (as it’s the Lib Dems), so things will get interesting when 2nd preference votes are added into the mix…RON could do very well here as people may have gone either A or B and put RON second…… Not going to call the winner… but I wish all candidates the best of luck!

elaine to win by a large margin because all of her supporters voted early before getting the evidence. RON in second. Sara 3rd from knee-jerk response, Ali knocked out in first round.

Scarlett is actually Liberal but these are LibDems so the turncoat, nulabour hack will win.

You can keep the thong...

This isn't inside information, just a guess.

Due to the emnity between both camps, it wouldn't surprise me if a lot of people put RON second, so he has a chance! Voting papers were out after national conference so I think those happenings will have made a big difference.
I think it'll be Elaine 1st, then closely followed by RON, then Sara then Muhammed (who didn't even submit a manifesto - someone even made a manifesto for RON!). Personally put RON first followed by Sara (who would have got first if it wasn't for that ridiculous apology then retraction).

@ commonweal - "all of her supporters voted early before getting the evidence" and have still got the evidence, from both sides, weighed it, and found Sara wanting. Or maybe you're right, maybe Sara-doubters are all conspiring against you.

I reckon Elaine will win. She hasn't done a bad job and we're finally getting somewhere, ignoring the election campaign.

@anon 1.39 - only when he was kicked out for suggesting the Liberals should merge with the social democrats from Labour in the 1960s... hang on...

Look, I couldn't care less - since when has Liberal Youth achieved anything. Nice that you paint me as a Sara Scarlett supporter despite clear and patent evidence that I voted Sara Mulholland.

Elaine Bagshaw is about as liberal as the Nazi party.

Which is funny, because that's what the video painted her as!

When she gets re-elected, expect Liberal Youth to face SUCH a crack-down.

Still, she'll be pretty toothless. She's lost face in front of the whole party, so will have trouble cracking the whip with anyone in the 'proper' party refusing to back her up. So unless she gets RONed (unlikely), she'll spend the next year running Liberal Youth more or less single-handedly!