If you don't like the West Wing, look away now.

As many have pointed out, there is only one profession with a lower public opinion rating than politicians, and that's journos. A vicious pack of hacks are a formidable bunch and no one will know that more than the White House press spokesmen. For West Wing fans, CJ's sometimes effortless put downs to this feral bunch were some of the best moments of the whole show. But now that the West Wing is gone, TB has to fill his days with watching the actual White House in action.

There is a fascinating insight

here
into how the seats in Obama's press briefing room have been allocated and exactly what this pecking order means. Here is the layout from February: 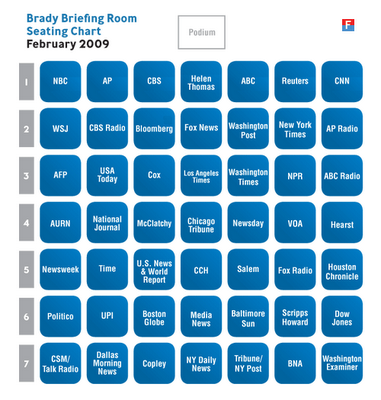 And here is March: 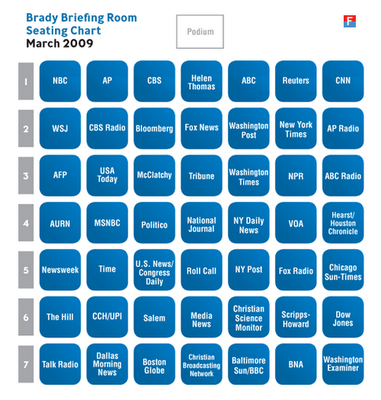 Interesting to note the creeping rise of
Politico
from sixth row to fourth. The further forward you are, the more likely Press Spokesman Robert Gibbs will answer your question. Politico, though it does have a small print edition, is seemingly leading the blogging revolution right to the heart of the White House. Not even the Obama worshipping lefty love-in the
Huffington Post
gets a seat.

In just three months of this administration, a blogging news service is almost at the front of the press pack, how will things look in a year?

One Man and His Small Dog
said...