TB is most grateful to an eagle eyed reader who has managed to dig out the elusive Mirror story about Draper's computer from the
deepest darkest interwebby
. Rule number one of the internet is that anything you write, even if it is deleted, lasts forever. However Draper freely admitted that he doesn't know his RSS from his elbow. As TB reported last night, the Mirror have seemingly pulled their negative story about Draper from their website and are standing on the street corner whistling...Move along people, nothing to see here. However in case you missed the original content of the story, allow TB to fill you in. Draper was doorstepped by a pack of hacks and they spotted that he was shifting his computer equipment into the back of a cab: 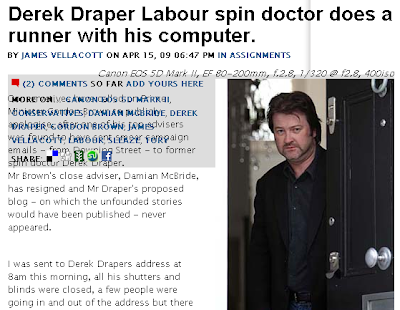 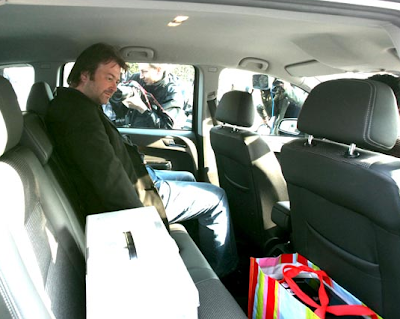 This story was linked to be various bloggers including TB,
Guido
and
Old Holborn
, suddenly a few hours later the whole thing has disappeared from the Mirror website.
What the hell is going on?
What is on that hard drive that needs to be hidden away, and why is the Mirror bending over backwards to protect Draper? The tone and style of the original post was rather anti-Dolly and whoosh, like that it was gone...
TB has a feeling he might be making some phone calls today...

I should point out that if you save the page as a .html file and then open it again in a browser it unscrambles the page.

quite like the rugged charm of the trash can version...

or in other words, way to sleepy to do that... night!

Thanks for your help though

I managed to save a couple of pictures on my blog as well.

I also posted a link to this on one of the MSM newspaper's blogs.

Good to see he chose a bag that doesnt attract any attention.
This is not in reference to his wife though.

I know what you mean, Sir Sidney, she's a bit of alright.

Why did she pick Draper, though? It must be like humping Swampy after he's come out of a sewage farm.

Heres a good link to a Times article with another photo of the bag
https://www.timesonline.co.uk/tol/news/politics/article6101635.ece
I'm beggining to smell a rat here, if you look at the picture of Dolly in the car with the bag follow his eye line, he clearly is pleased with himself for having that pc in the back with him, and the smug grin on his fat face really doesnt suggest someone trying to hide something, more like trying to make us think that is the case to deflect attention from elsewhere.
I wouldnt put it past the slimey hoon.

I'm off for a spot of tiffin now, back later.

Some excerpts from the comments sent to the site (when it was working yesterday) are reproduced here:
https://www.arrse.co.uk/cpgn2/Forums/viewtopic/t=120822/postdays=0/postorder=asc/start=600.html

further to last comment. The link hasn't appeared in full, but if you right click, select 'view source' then search for 'arrse', the full link will appear and can be copied and pasted into a browser : )

If there is really something on the hard drive he didn't want people to see, surely a few moments with a screwdriver would have been wise. Hard drives aren't all that big, and are actually quite simple to remove.

But then, I guess that requires a bit of forward thinking and common sense.