TB has given his new best friend

Tom Miller
enough time to deny that he and his little chums think the police are "fucking pigs" and gave him plenty of opportunity to do so. After he attempted to stir up trouble on the left by speculating, that through their brutality, the police had "killed" someone, Miller went on to give a weak defence of the Labour Party's record on policing in the comments section here.

For those of you who are new to this particular Labour chump, Miller is a high profile hack within Compass and Young Labour, indeed he is even
standing
for one of the junior positions in their upcoming elections. He is also the chief brown-noser to
Sam Tarry
, who is almost guaranteed to be the next chairman of the organisation. You can see Miller's coat tail endorsement of Tarry
here
:

Seemingly set to be the eternal bag-carrier, Miller is also a minion to everybody's favourite psycho therapist - Derek Draper. Dolly uses Miller to do the menial and boring research tasks that even he can't be bothered to do. Ever the keen hack, Miller is only ever too keen to help out and he puts in many an hour battling to keep LabourList afloat.

Miller has yet to apologise for his ill-thought out comments regarding the police and remains stubbornly naive to the potential danger of spreading rumours like that on the internet - especially at a time when tensions between the police and the left are at it's highest for a long time. TB has dug a little deeper and come to the conclusion that this could well be what Miller wants. He has not denied he hates the police and as you can see below, he proudly nails his true colours to the wall: 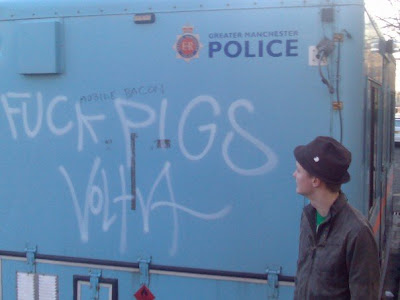 Just in case he attempts to weasel his way out of this little controversy too, TB can also provide you with a screen grab of what Miller really thinks of the police. With a simple "Awesome", Miller confirms his belief that this country's law enforcement officers, who risk their lives and welfare on a daily basis to protect this country, are "pigs". There he stands, in his silly little hat, supporting the sentiment of those who smashed up the City on Wednesday. No wonder he wants to turn people against the police by implying they are murderers - to Labour's Tom Miller "Fuck Pigs" is an "awesome" statement: 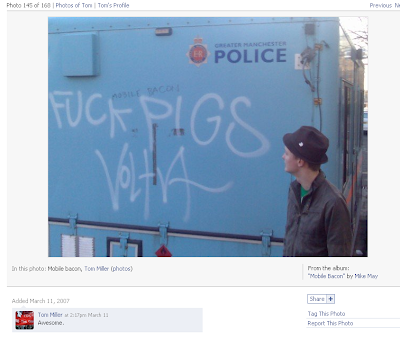 No wonder policing in this country is in chaos under Labour. No wonder there are riots are in the streets and no respect for private property or the rule of law. Tom should stick to
worshipping
Chavez on his blog, if it's police brutality he is after, why not go live in the socialist paradise? In the limited contact that TB and Miller have had, the Labour stooge questioned why TB would let pictures of himself in a tailcoat appear on the internet, cynically citing the supposed unattractiveness of this image to a floating voter. Well Tom your casual disregard for these public servants and defenders of the peace, is unattractive to everyone, except you and your wannabe anarchist cronies. Or is "Fuck Pigs" a view shared by all of Compass, Young Labour, the "Sam Tarry for Chairman" team and the rest of the LabourList staff?

If not, perhaps now would be a good time for them to distance themselves from their henchman...

Interesting. I didn't know that this chap works for Dolly, or his attitude toward the police and the rest of it.

I shall remember this useful background info…

"no respect for private property or the rule of law", the ordering of TB's statement indicates his priorities...

You don't really get sarcasm, do you?

Oh come on Tom, surely Draper and Labour taught you better spin than that.

you are actually going with that?

What about an apology to the Met first?

here
. Can't be bothered writing it all out again, what's the point eh?

If it's a choice between the Tailcoated Bear and the Brownshirted Hack, I'll vote Bear every time. I should qualify that remark by pointing out that one is 'Tory Toff Scum' one's self.

Fuck the pigs!
Protecting the rich,
And arresting the poor,
Who are alienated from their labour,
And who hate it more and more,
The police say that they'll see me in court,
With their falsified evidence,
And bruises under my shorts,
God save the pigs!

Not guilty. I've been calling you a Nazi on here right from the start of the discussions vis a vis the protests.

One wonders, then, why he supports a government that have been passing some of the most shamelessly authortiarian laws we've seen in decades.

The overbearing state is a New Labour innovation, not a police innovation. Bad policing is a symptom not the cause.

Even if I was an anarchist, I don't really see how anarchism would fit with Nazism save for the fact that you don't like either of them.

Anyway, it's a pretty crap argument, isn't it?

Anon, I support the government because I think the taking pictures of the police things is of low importance compared to more of them on the beat, along with more and better schools and hospitals.

When you have a Reichstag fire doing nothing isn't an option.