TB has noted before that Tom Harris MP clearly doesn't feel comfortable throwing mud at the tories and should stick to the analysis and well thought out policy based attacks. So it was nice to get back to agreeing with at least 75% of

what he said today
. The Sun
is reporting
that the ridiculous Crewe and Nantwich style "tory-toff" attacks are set to be rolled out nationwide. Good, bring it on, because it was clearly so successful last time they tried it! Here is the proof that New Labour have conceded that centre-right thinking is where this nation is now firmly based and they have no way to attack what the modern Conservative Party stands for. 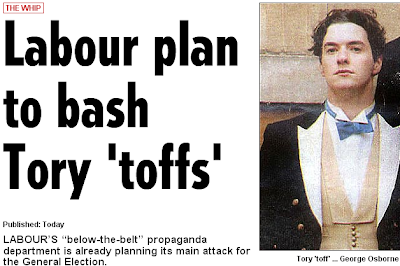 Labour mouthpieces like
Tom Miller
tried this attack on TB last week. Having never met TB, spoken to him or any member of his family, Miller thought he had a golden ticket with a
certain picture he found of TB from a debating society website
. Rather than defending his warped and deluded views that TB had called him out on, he instead chose to give prominence to a photograph as if that was a rebuttal, as if that weakened anything TB had to say. Well hate to break it to Tom and Labour, these sort of rubbish attacks just make you look pathetic. The British general public aren't stupid and have seen through this low mud slinging before and they will do so again.

Make your posters, throw your mud and we'll see who's laughing as the sun rises after election night.

UPDATE 14.33: Tom Miller is now claiming putting that picture up of TB was a joke, funny he didn't say that
at the time
. Everything is seemingly a joke to Mr Miller, no wonder he gets on so well with Dolly.

Tom's obviously a nobody cockwipe who's never been within 30 feet of a real live woman (due to the universal restraining order on butt-ugly cockwipes going near women).

I don't know how you do it TB but you have the patience of a saint to deal day after day with these... chavs!

It was more meant as a bit of fun-pokery than an attack. Bloody humourless righties.

My my the 77 Beak Street rebuttal unit works quickly.

Odd how everything is just a joke to you once you get called out?

Worst national debt in history ever, period? ahhhhhhhhh we were only joking around. bloody humourless taxpayers!

If it was humourless fun poking why did you say firstly "How on earth did you let that get onto the net?" in a message to me. And then write "Keep a copy of this picture folks. Goes down a treat with the floating voter." On your blog?

You're full of shit Miller.

attacks like these from left to right perpetuate the so-called war on "class differnces" you're trying to erode Miller, so why bother?

Anyone who puts "2.0" after their name deserves a thorough kicking, verbally or physically, I'm not bothered.

Stand by your comments Tom and stop being such a wanker. Actually those two don't work in unison.

Do you have any integrity? Attack 'righties' sense of humour? Love the greats... who is your idol- Russell Brand?

'twat of the highest order'

what a stirring and sophisticated defense of his position!

At least it you were described as a twat of 'the hightest order' rather than some second rate twat like Mr Miller.

I think that sums it up.

"Odd how everything is just a joke to you once you get called out?"

It's mostly that you repeatedly attempt to 'call me out' over things that I do just for chuckles. You're a very stern character.

"who is your idol- Russell Brand?"

Can't say much for his dress sense, but I actually think he is pretty funny, and I thought that all of that stuff with the BBC was as close to PC nonsense as you can get.

He did a brilliant doc about the BNP, it's on YouTube. Anyway...

The 2.0 thing is also ironic, jeez. So is the URL on my blog, if you hadn't noticed.

Re. facebook, yes TB, that is called taking the piss. Surely you must be used to it already? :op

You take a lot far too seriously, lighten up!

Seriously, I'm amazed that black tie still even exists. It's not so much that I'm full of class hatreds and red sedition as that I'm just completely bemused by the whole practise! Doubt I'll ever understand it.

Oh, Anon, there's no second rate about a man(?) who looks like that!

I'm soooooo 2.0! I'm the coolest!! Look! Some of us young folk still think Labour isn't a statist tyranny run by hate filled numpties!! We're so cool!! Look! We think we can shut down debate by trotting out some old photos of people, despite the fact that the attack is hypocritical bollocks! We're so cool! It worked in Crewe!!...oh..it didn't.. and one of them was privately educated you say? Neenie neenie nah noo, I can't here you!! Whateva! We're soooo cool!

There is no getting away from it TB. That is a bloody awful picture! :-)

"Make your posters, throw your mud and we'll see who's laughing as the sun rises after election night"

Well, it won't be you. "Libertarians" are in for one fucking hell of a disappointment from Camoron.

You realise it yourself, which is why half the blogs you read are LURPAK or whatever the fucking clowns call themselves, and you'll probably be joining them after a few months.

Just for the record TB. I think it's a good photo. The white gloves are especially natty. Shame about the ironic 'Red Eye'.

Were you refereeing a snooker match or something?