Who is Tory Bear? 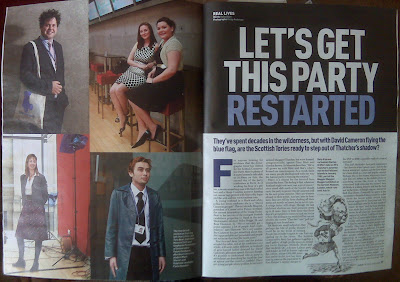 Saturday's
Herald
magazine had a big feature on the Scottish Conservative party after last week's conference. A range of candidates and party officials were interviewed, as well as Conservative Future types. It's a broad look at the state of play in the Party now and how they are slowly overcoming their unpopularity in Scotland. It concludes that slowly, very slowly the tide is beginning to turn.

They also had a little chat with Tory Bear...

Sadly the article is not online, and apologies for the quality of the BB camera, but this is what they said about TB: 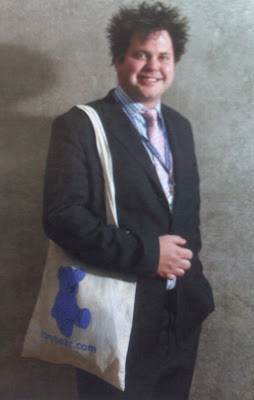 It would be wrong, though, to paint a picture of Cameron's new model Army as made up of former socialists, working-class scions and union reps. Most are posher than that. Even among the Conservative Future newbies this often turns out to be the case. Someone who knows the scene well is XXXXX XXXX, aka Tory Bear. About a year ago he set up his blog and from the moment he started writing about young people in politics, he says, interest hit the roof. XXXX isn't a Scot. Hailing from Kent, he is a student at Edinburgh University who got involved in the political scene but has no plans for a career in politics. Standing on a balcony overlooking the foyer he glances down. "I've been doing conferences and political events for a couple of years now and I'm amazed how many people under 30 there are here," he says. When he started the blog, he says, it was the "hackery" he was witnessing among the young involved in politics that he wanted "to call out". "It's a lot tamer, though, here in Scotland than it is down in London."

XXXX has noted the scarcity of Scots among the young Tories, even in Scotland: "One of the big taglines of the Conservative Future election was that Scotland needed a Scottish chairman. And it does. "It doesn't really go down very well, all the English involved in Scottish Conservative politics. When I'm canvassing around Edinburgh, it's like, why are you here?" 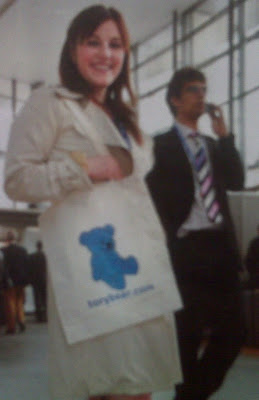 Seems the TB bags got some good coverage too.

Shame about the photo. Why is it that all Tories look like middle ages men who are losing their marbles?

- Who's the cute female with the bag?

- How did you persuade Robert Smith to pose without his make-up?

living up the brunette boris look then "XXXXX"?

Odd comment about English activists not going down well.

During the Glasgow and Glenrothes byelections there were plenty of student activists from England out campaigning and no negative response (well apart from the Nats!)

Why is an English Tory in Scotland ? Obvious. All the Scottish socialists are wrecking the nation down in London ....

What's with the XXXXX XXXX? Your name is included in that article and can be read quite clearly if one squints a bit.

Your name is Barry Mole and you learnt everything you know from your cousin Adrian.

I'm sure Alex Hilton's Recess Monkey site will have a lot to say about this story. I tried to log on earlier today but got a note saying it was offline :-(

Not the first time he's gone down on a young Tory eh?