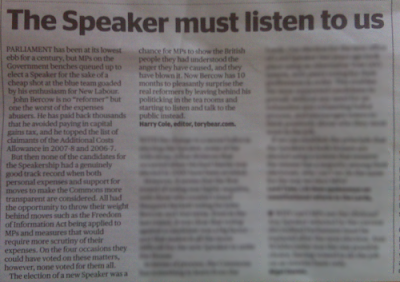 Here is what got in The Standard:

PARLIAMENT has been at its lowest ebb for a century, but MPs on the
Government benches queued up to elect a Speaker for the sake of a cheap
shot at a blue team goaded by his enthusiasm for New Labour.
John Bercow is no “reformer” but one the worst of the expenses abusers. He
has paid back thousands that he avoided paying in capital gains tax, and he
topped the list of claimants of the Additional Costs Allowance in 2007-8
and 2006-7.

But then none of the candidates for the Speakership has a genuinely good
track record when both personal expenses and support for making the Commons
more transparent are considered. All had the opportunity to throw their
weight behind moves such as the Freedom of Information Act being applied to
MPs and measures that would require more scrutiny of their expenses. On the
four occasions they could have voted on these matters, however, none voted for them all.

The election of a new Speaker was a chance for MPs to show us that they
had understood the anger they have caused, and they have blown it. Now
Bercow has 10 months to pleasantly surprise the real reformers by leaving
behind his politicking in the tea rooms and starting to listen and talk to
the public instead.

"No referring to the identity of TB"