Putting Nick “what about my access” Robinson, The Guardian's chief sleaze apologist Michael White, and their arch rival Guido Fawkes on the same stage was never going to be pretty. It was a gamble that clearly paid off though for

Delib
. The political consultants hosted last night’s packed debate in the Grand Committee Room about whether the internet is the corrupter or saviour of democracy. After this lot once battled on Newsnight a few years back, there were old scores to settle. 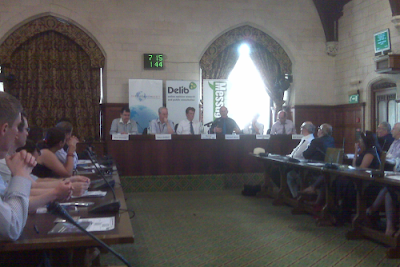 Though people who wished for in depth chat about address harvesting and Obama type fundraising were grumbling, those there to see some of the most powerful political voices outside of Parliament spar did not leave disappointed. Guido went on the attack from his opening gambit and left a rattled White and Robinson having to resort to irritating liberal elite-esque sarcasm in an attempt to bat away criticism that had clearly hit a raw nerve.

The argument for the internet was greatly aided by the jumbo Twitter screen at the side of the stage which let the world
take part
in the event. Michael White’s somewhat Luddite performance was greatly aided in terms of comedy by the quick thinking anonymous tweeter who managed to crack the room up with
his message
for Michael on the screen.

im here all week
glad to help
did the big white react?