It is a truth universally acknowledged that there is no one as ruthless a wannabe hack, but it's never very nice when someone you considered to be on friendly terms with sells you down the river for the sake of a thirty quid by-line. 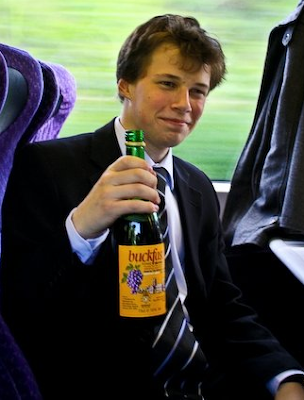 This is James Ellingworth, a student newspaper hack on Edinburgh's
Student.
Obviously so desperate to impress the bigger boys during his work experience week at the Herald, TB bets that "Smelly Ellie" (as the hacks call him behind his back, "apparently"), really thought he had made it when he could get his little name in print by doing over Tory Bear.

Luckily Scotland's finest at the Herald thought it better to remove most of the bullshit that Ellingworth had filed.
Ended up with a bit of free advertising
! Oh and poor little James only got his name in the print edition.

So beware hacks, James Ellingworth will sell his grandmother for a by-line.

Never before has TB come across someone whose ambition so outweighs their talent.

Never come across someone who's ambition so outweights their talent? Gordon Brown?!

I don't see what your problem with the article is to be honest, beyond a personal grudge that only a few will be privy to. And there is something ironic, perhaps even hypocritical, in your seeking greater transparency in the world with SPOC or whatever it's called while you plead with people not to reveal your identity in comments. Not that it bothers me, i'm just saying...

as is it is its great publicity but to what was the stuff taken out?

jeff i think harry does it to wind you up.

I don't see what you're so mad about really, that Herald article online seemed quite reasonable.

I'm angry because its a non story. Shock TB a tory! It makes it out as if it is some exclusive revelation when I've been openly saying on tv and radio for the last two days.

Further attempts to link me somehow to senior conservatives were made by Ellingworth that were utter bollocks and thankfully the herald saw fit not to publish them.

he should also get his own fucking stories instead of trying to piggy back on someone elses by stating the bleeding obvious.

Jeff- it's.a joke with the name. Never tried to hid it and it doed go down so badly with tim ireland and the rest of the tin hat bridgade that it makes it worth it.

TB is getting drunk tonight in.a field in Somerset. Moderation may be slow.

i would be annoyed frankly iff someone was cashing in on a grudge and some shoddy journalism. anyone with half an ear to anywhere close to the ground or even someone who had read more than 2 stories could tell you that TB is far from a "scots tory". as nats we see this type of shoddy journalism and downright lying regularly.

the sunlight cops will be portryaed as some rag tag band of tories when they regularly go after tories such as spelman. guido especially is anti all politics.

this is the same as the guff the herald (and the scotsman, which i just cancelled) spout not only about the tories, but the snp, when (due to the system whereby many safe seats exist) it is labour which are the corrupting influence in scottish politics.

no doubt that with this gentleman feeding them info we will hear all kinds of nonsense about oliver (son of david) mundell aswell.

defense of tories over :)

Hello TB, this is LB. Since being petty while referring to yourself in the third person seems to be the order of the day round here, LB is going to go ahead and ask TB to remove that photo. LB took the picture, TB reproduced it without permission and LB would rather not have anything to do with a website that makes weak personal attacks on LB's friends. Thanks.

Fraid you grasp of the law leaves a little to be desired. When you upload photos to facebook, the terms and conditions state that you revoke ownership of said photo. Therefore I think facebook have better things to do than sue bloggers so guess the photo will be staying up.

Thanks for stopping by.

Seems both the moral, ethical and literary standards of the election haven't progressed since my day.