Not blowing his whistle now is he?

Independent candidate in the Norwich by-election

Craig Murray
, the volatile former Ambassador to Uzbekistan who "
quit
" on an apparent crisis of conscious, has begun his campaign with some heavy spin. He is standing on an anti-sleaze platform. His
website
is full of rants and ravings about expenses and, generally, he isn't a fan of politicians. This is his first leaflet: 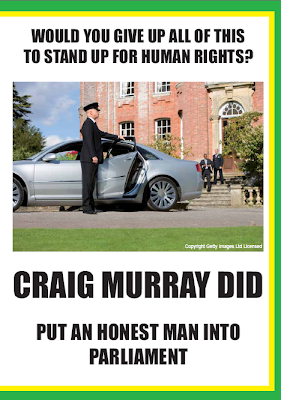 However Craig fails to mention the fact that he
hard-balled the FCO out of six years full salary
before he would fall on his own sword and is thus still on the taxpayer funded payroll to this day.

Surely the voters of Norwich have a right to know about this little bit of hypocrisy eh Craig?

To be fair he did write about this in his autobiography, so it's not exactly a big secret.

never said it was. was just highlighting how strange he left that off the leaflets.. haha.

He had worked for the foriegn office for decades, was still around 20 years from retirement and had destroyed his career with false allegations about drunken-ness and sexual harassment. So they certainly owed him something. Whether the claim on the wikipedia entry about it being 6 years salary is true or not i have no idea, as wikipedia pages that havent had comments locked can be edited by anyone to say anything. I'll let Craig now about this, but trying to pretend it reflects badly on Craig even if it turns out to be true would be ridiculous.