Anton Howes set up the very sound
Social Liberalist Party
in 2008. The Telegraph
described
it as a "Facebook party" in March and Alex Singleton went on to say:
"Often school pupils who are interested in politics are overweight and socially inept, but Mr Howes is just a normal teenager, albeit a particularly eloquent one. As he spoke, I saw someone who the Tories ought to be wooing. That he hasn’t joined Mr Cameron’s party suggests that the Tories still have a way to go to get the votes of the young, many of whom prefer to stay at home rather than visit the ballot box." 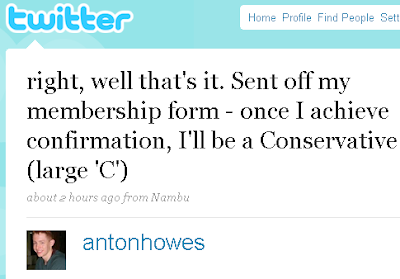 A slap in the face to all the people you knew over the last few years, who thought you wanted something different?

"We have people up and down the country organising branches and working to elect SLP MPs." Haha not any more you don't.

"After all, why should you have to pay to take part in politics?" Well Anton you just did

Oh forgive me - he did resign last month. Well that's alright then.

In Anton's defence he resigned as "leader" a while ago.

the SLP marches on it seems.

Hmmm yes, I probably am a hypocrite on some level. But then, who isn't?

No, I don't think the time I spent soul-searching is an excuse. Let's face it, I'd already been considering the Conservatives for a while before today.

Regarding the first para of Ruth's very necessary comment, I'd only set it up in 2008, and to be honest, I think most people expected it in the end. I do however still want something different -I am still very much both socially and economically liberal.

I still do want something different - but is change best achieved through a tiny organisation of 300 members, or through a huge party that has the prospect of forming a government in the near-to-medium future?

Yes, the SLP is still continuing. It will be interesting to see how it does.

It just takes time. Only five years ago I seriously considered voting for the Green Party.