Now here is a rarity, TB is in complete agreement with Barry and his crew: 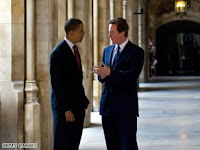 RW: He had a strong impression, a strong reaction, to both Cameron and Brown.It was right at the end of his foreign trip. And he was really taken with Cameron. He and his aides thought that he had energy and verve, a dynamism that suggested he was a good candidate – remember this was a candidate at the time, not a president. And there was bonding that took place which you might not expect of two people at the opposite ends of the political spectrum.

SM: And what did he say of Brown?

RW: Brown, on the other hand, really they found very lacklustre. They thought that his mood and his dourness – they found the experience faintly depressing, actually. A sort of end-of-regime feel about the whole thing.

The news has emerged via
Andrew Sparrow
who was reporting on Richard Wolffe's new book Renegade. Wolffe has considerably more access to the players than The New Statesman did last year when they reported this load of tripe that was jumped on by the left:

You miss the full quotes don't you though Mr Bear:

Blair: sizzle and Substance, Brown: Substance, Cameron: Sizzle was what was said.

Still, don't let the truth get in your way.

The fact is, Obama is streets ahead of Cameron in principle and liberal, democratic credentials, and miles ahead of Brown in liberalism and charisma.

TBH, I don't want either of them to have the approval of Omoron. Though it's pretty telling that the Grauniad et al aren't falling over themselves to churn it out like they did the fake Baltimore mayor statement. Wot, media? Biased? Yer kiddin'.

"Obama is streets ahead of Cameron in principle and liberal, democratic credentials, and miles ahead of Brown in liberalism and charisma."

Why don't you move over there and marry him then, Anonymous? Oh wait, the Great Bore doesn't approve of gay marraige. Oh lol.

Why then was Obama heard to comment that he considered Cameron a 'lightweight', and the party as having 'archiac views' on Europe?

Surely everyone realises the meeting was spun as a success as both parties realised they are heading for government and will have to work together in the future.

Obama has been close with Blair for years, can a man who (foolishly) describes his number one ally in the world as the EU really be excited about the sizzling prospect of a Conservative government?

"Why then was Obama heard to comment that he considered Cameron a 'lightweight', and the party as having 'archiac views' on Europe?"

Because the lefty sources were lying. Anything to protect dear old Gordo.

Though it's worth pointing out that the last time Omoron butt into EU affairs (RE Turkey's entry) he was told to take a hike off a tall cliff.

I think it more likely that attempts were made to put a positive spin on the meeting than to play down the sparkling conversation to make Brown look less autistic.

As far as I am aware the sources that reported the 'lightweight' comment were Obama's own staff, but it was widely reported.

Whether the comment was 'sizzle without substance' or 'lightweight' makes little difference, it appears clear that in action Obama is no friend of Great Britain or the Conservative Party.

Of course he is still happy for us to bear the lions share of the brunt in Afghanistan while his number one allies in Europe stay home, I assume sending him plentiful packages of cheese or whatever they use our subsidies for.

After the DVD fiasco and returning the bust of Churchill, that should be common knowledge by now. He didn't seem particularly perturbed when Old Europe only donated a brigade's worth of troops in total to Obama's war a few months back.