Can anyone think of anything funny to rhyme with Carter Ruck?

TB loves the quote on the front page of the

Carter Ruck website
. They actually boast at what a walkover the Guardian is: 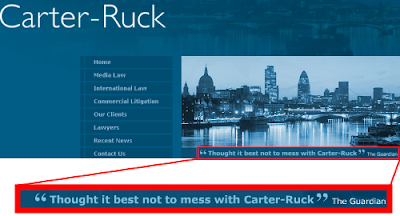 Clearly they took their own advice and didn't "mess with Carter Ruck." TB on the other hand has no money:

Question 61
, to be asked on Wednesday 14 October, by Paul Farrelly MP for Newcastle-under-Lyme:

To ask the Secretary of State for Justice, what assessment he has made of the effectiveness of legislation to protect (a) whistleblowers and (b) press freedom following the injunctions obtained in the High Court by (i) Barclays and Freshfields solicitors on 19 March 2009 on the publication of internal Barclays reports documenting alleged tax avoidance schemes and (ii) Trafigura and Carter-Ruck solicitors on 11 September 2009 on the publication of the Minton report on the alleged dumping of toxic waste in the Ivory Coast, commissioned by Trafigura.

What's all the fuss about? The Guardian should get some balls and Carter Ruck should take a long, long, hard look in the mirror before they damage their entire profession.

Spectacular fail on their behalf. As is so often the case - attempting to silence a story only makes it spread far far quicker!

Another victory for the blogosphere.

spectacular failure by the courts, too. Great piece in latest Private Eye on how much of a walkover judges are, too.

Ask people to use hashtags #trafigura and #carterruck today - get this as a trending issue and the nonUK media will pick it up.

"TB on the other hand has no money"

Neither do the Guardian.

"TB on the other hand has no money"

Of course you don't. That's why you can afford holidays in France and America, and White Tie dinners, along with 99.9% of the population.