So wait, it's not like that hasn't been reported? Gag TB? 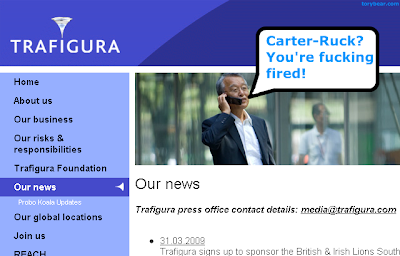 TB would love to be a fly on the wall during the Trafigura/Carter-Ruck conference call that will undoubtedly be taking place this morning. The plan to keep the naughty little secrets that Carter-Ruck are no doubt being paid all sorts of millions to keep under wraps, has backfire spectacularly. Whoever thought it would be a good idea to try gag a British newspaper from covering Parliament should have watched that great episode of State of Play with Bill Nighy as the pesky newspaper editor.

Nothing like a handful of bloggers short of stories on a Monday night to put a spanner in the works though. Kudos to
Guido
,
Alex Massie
,
Next Left
,
Tory Politico
and
Political Scrapbook
as well as thousands of the twitterati for firing this one up.

You failed to mention Wikileaks, their link is this:
https://www.wikileaks.org/wiki/Minton_report:_Trafigura_toxic_dumping_along_the_Ivory_Coast_broke_EU_regulations%2C_14_Sep_2006

Interesting reading, there is a link to the Barclays saga too.

Good to hear now that the Guardian is able to report on the story now.38 Degrees are currently running a campaign on this. Take action now by emailing your MP and asking them to take a stand to stop this happening again in the future. Take action now, it only takes 2 mins. Go to: