So the chat this morning in geekdom has been about the apparently successful campaign by one Ellie Gellard, or

Miss "Polly Toynbee's columns make me cry" Gellard, a calm and tempered young lady, prone to reasoned and well thought out debate has been campaigning to get the Against The Odds, a video knocked together on Windows Movie Maker to introduce Gordon Brown to his ill-fated last conference speech, shown as a Party Election Broadcast. While it no doubt was rabble rousing in the hall, a video to get the hacks going, the overexcited Bevanite decided, probably because it had the word "Nye" in it, that it needed to be taken further.

In an impressive campaign for someone living in a different country to pull off alone, she enlisted the support of comedians Alastair Campell and Eddie "Gimme a peerage" Izzard to back it. The petition also had some
interesting signatories
on it, they include 13 Richard Cuntlethworpe, 15 Patrick Arsehead, 17 Jim Bollocks, 18 Neville Cockworth, 20 Kevin Stalin, and finally, 127 Daniel Fuck. Interesting too that Kerry McCarthy MP, Gellards one time boss and Labour Twitter Tsar had inside information on the decision hours before it was
leaked
to James Macintyre at the New Statesman.

So about the video. The fact that Victoria St are even considering showing it on television proves a lot of key points. Firstly, things are more desperate than imagined. For the Labour Party who have spent the last twelve years denying their forefathers and refusing to acknowledge, out of pure sense, their socialist routes, to turn round and produce this vomit inducing montage beggars belief. Brown, Blair and Mandy chopped this baggage away with a blunt axe and now have the audacity to attempt to use Old Labour as a lifeline. Oh and did you know President Obama is in the Labour Party? He features up there with Foot and Kinnock and Brown - all the fighters together. Smirk.

Brown a fighter? Yeah ok, because he's never ducked a fight before eh. Why no Callaghan either? Surely he should be included in that loser montage towards the end. And it's good to know what a million pounds can buy you in this devalued age. Yes that's right donate a million quid to Labour and you get a chance to plug your books and snivelling fairytale on television.

Joking apart the JK Rowling section will have to go if this video is ever actually broadcast on TV, such shameless product placement is unacceptable and given the donation could be a potential headache. The historical inaccuracies are appalling too. Since when can the Labour Party claim victory for votes for women given Lloyd George's government passed the Bill after WWI, not anything the Labour Party did? How about defeating fascism when Churchill won the war, or taking credit for freeing Nelson Mandela. As for Nye Bevan, well TB is still hunting down the name, but he certainly wasn't the first working class minister. Oh and TB has said it before and will say it again - Barack Obama is not in the Labour Party. He thinks Gordon is a toxic loser, hence why he won't meet privately with him and such shameless attempts at stealing some stardust look as pathetic and they do desperate.

Amusingly there also seems to be a massive cock up 32 seconds in. While discussing Nye Bevan, the footage is of Ernest Bevin: 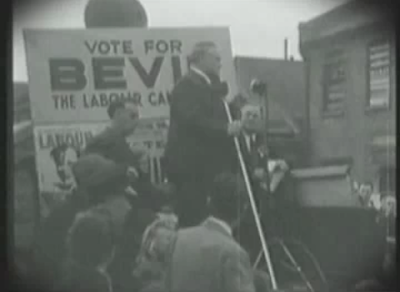 What is Ellie's favourite word for describing perceived tory cock ups? Was it fail?

Labour are playing this as a "look at us all down with the techno kids" move. Showing how caring and chummy they are with their still lacklustre online community. Those TB has spoken to privately are anything but enthused and while they liked the little campaign, they are slightly bemused it has been taken seriously. Already some have spoken out publicly, against the video being shown on television. Perhaps most surprisingly, the uber-loyal NUS President Wes Streeting
slammed the idea.
If anything TB is pleased that Labour have had to sink this low. Clearly they are so broke they can't afford a new PEB so will rehash this tripe. It shows desperate times really do call for desperate measures. If Brown wants to invoke a history of socialist extremes, and a string of bonkers losing leaders to try and save his ass then let him.

The sensible voter will reject this cynical nonsense.


UPDATE 13.21: The ever sharp
Working Class Tory
has sorted out the miner innaccuracy:

When did they say that? They didn't, because it obviously wasn't true. Miners had been ministers in several Labour governments before Attlee's. The Labour Secretary for Scotland, William Adamson, was an ACTUAL MINER, not just the son of one. So Nye Bevan is completely irrelevant in this."

It's called protecting the core vote. They're looking at meltdown and the only means of propagating a future, however crap, is to shore up* that 26%. The brains inside the party see this as being an aide-memoire to those who may have forgotten that, after 12 years of undemocratic shite, the Labour Party used to have principles and beliefs.

* That's a deliberate pun by the way.

300 signatures? Is that it? Maybe a case of who you know rather than how many signatures you can get. Did it even trend on Twitter?

They missed so many things that Labour also gave us - discovery of penicillin, first man on the moon, the Iraq war, The Afghanistan war, daylight, first live TV picking your nose and eating it tecniques, Squeker Bercow......

What amatuer twaddle this video is - or is it just and ad for Harry Potter?

They are common names if you live in Brownland.

First working class Minister may well have been Jimmy Thomas MP for Derby 1910-36. Sleazy bstad and resigned in disgrace. Used to order his champagne by the barrel according to contemporary reports.

Not wanting to be pedantic but champagne is, and always has been, unavailable in barrels. Its secondary fermentation, that which makes it champagne, occurs in the bottle.

Ask Barbara Follet; she'll confirm that for you.

Fisking, including a working class minister. A miner, actually, not a miner's son.

I think we've struck a nerve. Did you enjoy the video?

There is no such thing as bad publicity.

I'm disappointed. I thought it was

the pilot for a new sitcom
.

It's certainly the funniest thing I've seen on TV in years.

What an embarrassing appeal to their core voters.

So Labour gave women the vote, created the NHS single-handed, freed Nelson Mandela and on and on.

I think that it is likely to start a spate of "Downfall" style P**s-takes.

A few of those and this vomit-inducing piece of bovine excrement will be consigned to the cesspit, where it belongs.

One thing that they forgot, though, is "Gordon Brown, Saviour of the World"

Somebody had to sell all our gold reserves and raid your pensions... we did. Someone has to tax you until you give up and move overseas. We will. Because we must.

It looks like the intro of a Mad Max movie.....welcome to a post apocalyptic world of lawlessness!

I actually do think the decision was taken purely on financial grounds- Labour know that they have to save their cash for the marginals hence why this is a PPB.

I also feel that to show the opposition one of your PPBs months beforehand is a tad stupid, allowing the Tories to parody/take apart this in advance of the General Election. It's an early Christmas present for David Cameron.

If you're looking for the first working class minister you might want to try Cardinal Wolsey, who was born the son of a butcher but rose to Lord Chancellor in 1515. He was probably infinitely more competent than most ministers we have today. Shame they won’t meet a similar fate upon leaving office....

This Against All the Odds video really gets up my nose. Thanks for drawing my attention to Working Class Tories dissection.

It inspired me to

In the pay of Moscow the lot of them.

The Labour Party. A treasonous organisation and a form of self-harm for the poor.

Labour really do need to get their act together - they missed out SO many socialist fighters, men who have real and impressive socialist records to inspire us.

Hitler, Stalin, Castro, Che, Pol Pot, Mao .... men who knew that death was not a tragedy but a statistic.

I think you are an utter cock. But even a stopped cock is right twice a year. And this is, though it pains me to say this, an excellent post.

If I were you I'd slick my hair up, get Guido to the same, buy a couple of cheap grey suits, and you're Jedward, good-to-go...

It's all been said.

Votes for women? No.

I think it's quite a clever piece of communication - https://politicaladvertising.co.uk/2009/11/16/labour-against-the-odds/

That sequence of Brown in the classroom:
"Now you see that beer can, at the top of the flipchart, that's the national debt, that the stingy Tories left us, when Labour took over in 1997.
That line of huge great beer barrels, at the bottom, is the size of it now. Haven't we done well? We've taken one beer can and turned it into a whole row of barrels in only 12 years.
That's why you should vote Labour, so that your great, great grandchildren can still have some of the beer, from the barrels, that we created"

Ellie Gellard? Bloody hell how did so much stupid get into one person?

...and Obama thinks Cameron is a lightweight. No surprising since "Call Me Dave" invited his opponent a few weeks before the presidential election to speak at the Tory conference. Cock-up or what, deliberately trying to influence US elections.

Now that "Call Me Austerity Dave" has missed off Merkel and Sarkozy, and Obama, what friends will he have left if he ever gets into power. More like "Call Me Ineffectual Dave".