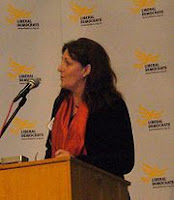 TB's ears at Lib Dem HQ have confirmed that Baroness Ros Scott - the president of Liberal Democrats sanctioned the coup against the now former Liberal Youth Chairman. It is no surprise then that this one succeeded where so many failed before. Scott was approached by the plotters before the letter was put to Bagshaw and given the fact so many of the executive had already resigned it was simple to set up the two thirds no confidence constitutional passage out for Bagshaw. Elaine tried to fight it, but with the party machine against her she soon realised her time was up.

Smart move by the plotters.

Given EB usually works her way out of a row by either bullying or sleeping with the person who complains, involving RS was a good way of bringing in someone she couldn't get at this way.

Ros Scott's kids both had long involvement with LDYS, and she's always been a close supporter of the youth wing, so it seems very unlikely this was just a rubber stamping by her.

Stand by the story. Not going to out my source though thankyouverymuch

Ros wouldn't have needed to "sanction" anything.

Liberal Youth is autonomous of the main party and has its own governing structure and constitution.
If - and I have no new information - 2/3 of the Executive put their names to a letter asking Elaine to step down then Elaine will have known that she could be constitutionally removed and that she could either jump or be pushed.

The federal party has no input in the process and any meddling by the Party President, Leaders Office or the Cheeky Girls would have been to no end.

Firstly RS did NOT 'sanction' this.

Secondly, to say that "EB usually works her way out of a row by either bullying or sleeping with the person who complains" is a nasty, vindictive thing to say and it is simply not true.

I find it disgraceful that you people feel the need to lie at every given opportunity to try and con people into joining your corrupt party.

I've had a couple of tories tell me today that the Conservatives were the only truly liberal party, but the only liberal thing I see is the use of lies, lies and more lies.

Having spoken to Ros, she actually reused to sanction it. In fact, she was asked but rightly kept out of it.

Ros Scott would have had no power to "sanction" this or otherwise.

Elaine was removed from her post according to the constitution of Liberal Youth. The very constitution from which she derived her power.

Neither Cowley St. nor the President can interfere with party SAOs behaviour if they're behaving constitutionally. Frankly, the inner workings of Liberal Youth are non of Ros's business. She has better things to do.

Sophs - libel, you tit, not slander. If defamation is in writing, it's libel.

Don't bandy around legal expressions if you don't even understand them. You can get everybody into a lot of trouble very quickly that way.

Anyway, I can see it would be *really* clever of the President of the Liberal Democrats were to try to sue an immature 22-year-old Tory blogger over tiny tot antics in the run-up to an election. It would make her look really big and clever. Not.

Jeez, you Lib Dems just don't get how totally unimportant you are in the grand scheme of things, do you? The rest of us just don't even think about you 99% of the time - and when we do, we laugh.

Your opening claim and your article are non sequiters. Just like 'Do bears shit in the woods' and 'Tory Bear is a shit' don't naturally follow. Maybe a bad example as both are true.

"Sophs" if that is your name, nice IP address btw.

It's as if you people want this story to keep on running and running.

Scott was informed of the coup and it had her blessing. The party machine were tipped to it happening and made no effort to talk the plotters out of it.

Sara, you know more than most that this coup, as others in the past have, could have been stopped with a nod and a wink from Cowley St.

Loving the rapid rebuttal from so few computers!

If you wish to express your ire at what's gone on, come to Spring conference in York an join in the no-confidence motions that James Shaddock is apparently planning to bring against the whole exec.

Vapid bellicosity against Tory Bear is useless and actually entertains him (as you'd see if you read his posts on the 09 election). I suggest you zip it and save your strength for conference when your words might actually have an impact.

"Sara, you know more than most that this coup, as others in the past have, could have been stopped with a nod and a wink from Cowley St."

Had RS stepped into this situation rather than just being aware of it all she would have been able to do was throw her weight around and make the lives of the plotters harder. It would have been totally soft power maneuvers.

The party President has no hard power granted to her by any official party document to either stop or sanction this move.

To prevent members of an SAO from completing an action deemed completely appropriate by its Constitution... well, that would be corruption, now, wouldn't it?

So in this case "sanctioned" essentially means the absence of any dodgy dealings.