What Did Gordon Know and When?

A scandal far from London is edging closer and close to the door of Number 10. In amongst the plants and moans that normally take up the latter stages of PMQs there was a rare gem of a very intriguing question from the SNP's Angus Robertson asking Gordon about a conference call to discuss the suitability of Labour's disgraced cocaine king
Steven Purcell
as the candidate in the Glasgow East by-election in 2008. As the Screws
reported
a 'Labour insider' claimed:


"At that point, rumours about Steven had reached the party headquarters. So a discussion was had with him - and he was asked outright about the drug rumours. And after that, any idea of him being the candidate was ABANDONED immediately."


AR: "Given that the Prime Minister will have looked closely at the tragic case. Will he confirm whether a Downing Street staffer took part in a conference in July 2008 which discussed the suitability of Stephen Purcell?

GB: I know nothing of what he says but I shall look at it.

Always one for a dodging a question, what was Gordon so coy about? Why so subdued? Surely this was a great chance to attack the SNP for appalling smears, as they are so often, and tell them to put up or shut up. TB understands that at the post-PMQ briefing afterwards Scottish journalists were palmed off with: “There are more important questions”.  For once someone doing the briefing was correct. There are some very interesting questions still surrounding this case indeed.

Could it be that Brown knows more than he is letting on? The story of Steven Purcell's resignation has led to a constant drip drip about just what was going on at Glasgow City Council and its relationship with big donors to the Labour party. The Scottish Sunday papers are having a field ay about big Labour donors and lucrative public sector contracts. Million pound
deals
, quango
donors
and Purcell
linked
to shady companies. And it goes further than that -
blackmail and organised crime
.

What TB can't understand is why the caledonian editors are so reluctant to get down and dirty and blow the lid of this story once and for all. It's not like they
didn't know
: "Politicians, journalists and lawyers alike, apparently, had direct or indirect knowledge for years about the personal habits of the leader of Glasgow City Council and chose to ignore it." Great. 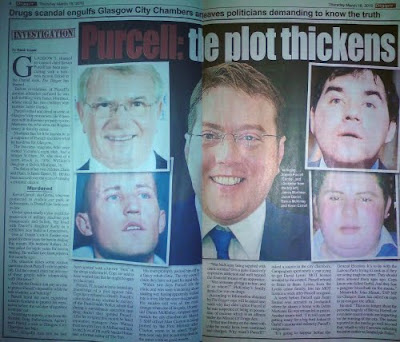 But this whole saga has plenty more questions that are still needing to be answered. Not just about Labour donors getting taxpayers cash but about Labour donors and their connections with gangsters. "The Digger", a small A5 Glasgow newssheet has just revealed that Labour donor James Mortimer is the uncle of the common law wife of a well known Glasgow gangster. 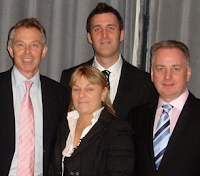 As well as being a high profile attendee, along with the Prime Minister, at the Labour fundraising dinner the day before Steven Purcell's little moment of cirsis, Mr Mortimer has entertained some intriguingly high profile people at his
Club 29
in Glasgow.

Such links between the Scottish Labour party and the mob have been raising eyebrows for the
last few years
. Like the Red Rose Dinner attended by Labour First Minister Jack McConnell and John Reid. It was also attended by a drug dealer by the name of Justin McAlroy who ended up dead six days later. James Mortimer also attended that dinner.

His father, Tommy McAlroy, who is a close friend of Labour whip Frank Roy, has also been
implicated
in drug baroncy. And it’s also not the first time John Reid – a former Home Secretary for goodness sake – has had family connections reported that
raise eyebrows
- his father in law was arrested in a drugs bust.

So you might be getting an idea why Gordon Brown was not exactly keen on drawing attention to the UK media about a story which has him and numerous senior Labour leaders wining and dining with people who have some seriously dodgy connections and backgrounds. If its full implications broke before the sixth of May it may not just destroy Scottish Labour but bring down Brown.

But there are three important questions that still remain unanswered over two weeks after these events broke. So TB will have to ask them publicly in order that the media in London do what Glasgow news editors have been too afraid to do.

1. Who is paying for Steven Purcell's bills? Public relations, top media lawyers, stays in rehab clinics and lengthy trips abroad cost money and Steven is now unemployed - his whereabouts still unknown. Most of his money went up his nose so how is he paying his way. Why did he turn down the help the council's media officers offered?

2. Under Steven Purcell's leadership of Glasgow City Council what deals have the council,
City Building LLP
and any other arms length organisations set up by the council done - particularly with major Labour donors like James Mortimer, Brian Dempsey and Willie Haughey?

3. Who was sitting at the top table with Gordon Brown and Steven Purcell at the Labour party fundraiser the night before Steven Purcell's announcement to his colleagues and did anything happen at the dinner to hasten his departure from the council?

- “There have been hints that some Scottish newspapers have pulled their punches because editors have been too close to Steven Purcell or worse, have been cowed into submission by Peter Watson (of Levy & McRae) and PR firm Media House.”

With regard to scots 'mafia' I would respectfully suggest a Google search for "Hollie Greig".

A horrible story awaits your consideration.

This is explosive stuff.The newspapers in Scotland have been slow to react and as for the BBC ???? well they have put their heads in the sand in the hope it would go away.
The best bet of this all coming out would be if the English media get a whiff of the scandal getting close to Gordon Brown.
Gordon Brown was with Purcell the night before he resigned at a Labour party fundraiser.
There is a huge story here unfortunately it won't be the Scottish media who will expose it they are completely entwined with the Labour party in this country.

Good summary of the Purcell situation.

Unfortunately any disclosures will have to come from the London media as the Scottish media have tried their best to bury the story, and has been hardly mentioned by the BBC.

But watch your back. Glasgow Caledonians have Sicilian friends. Ever wondered why frozen Glasgow has so many Italian ice cream parlours and pizza places?

Its worse than you elude to when our subsidised public broadcaster in Scotland is suppressing this story as it acts as a Labour party media outlet up here.

Levy & MacRae, Solicitors (also involved in the Hollie Greig Case: not that I'm convinced in that one) aren't a firm one would associate with the Labour Party in Scotland. Their founder Willie MacRae was a senior SNP Officer and Parliamentary candidate who died in somewhat unusual circumstances some twenty-five years ago

I am suprised that Purcell didn't use a firm associated with the Murphia in Glasgow.

The City is one of the most if not the most corrupt local authorities in the UK. We have one private firm City Buildings Ltd wholly owned by the Council buying two x £2,000 Tables at a fund raising function for Glasgow City Labour Party. We find one prominent Labour supporting businessman (donations supposedly into six figures) getting contracts even though it seems his company's wasn't the lower tender while in addition there are suggestions of some equally dodgy land deals

Its not new either :-when Parkhead Stadium was rebuilt in the 90s Planning Procedures were accelerated, building standards were shortcut. The relationship between Celtic Football Club (Chairman John Reid MP)and Glasgow City Labour Party gives off a stench

Mind you as I read on another blog two weeks ago, "if Gordon Brown nuked the Glasgow housing schemes, the survivors would still vote Labour"

Oh for a World in Action or Panorama special on Glasgow

If the Scottish media can't be bothered to face up to the hideous story of Hollie Greig, why on earth should we expect them to open this can of worms

Anon says "If the Scottish media can't be bothered to face up to the hideous story of Hollie Greig, why on earth should we expect them to open this can of worms"

We have to pay for the BBC why are we forced to pay for a biased media when if we had a semblence of democracy we could opt out.

The Herald and Scotsman are both going bust. They wont ask questions because it is public sector advertising which is keeping them alive.

Anon "The Herald and Scotsman are both going bust. They wont ask questions because it is public sector advertising which is keeping them alive."

And who blocked the SNP from putting that advertising online all 3 unionist parties.

I haven't bought a newspaper for years as they only have copy and paste journalists rather than grassroot journalism.

Something stinks in the naked city.
Where's Taggart when you need him..

The dinner is the key.

If the rumours are true,
Do not think that when the influential conduct clandestine meetings in pub car parks with the less influential and socialise with them that it goes unnoticed.

I feel that we are in the calmer waters just now but we are about to head into the squalls - The weather will change in the course of the election .

I have a gut feeling that this is going to erupt soon, I would be willing to bet on it.

Columbo is on his way. A stinking one-eyed tramp with shit under his finger nails.

The Scottish media know most, if not the entire, story.

The question is, can the Tories get an editor to come over to the dark side, as a drop in labour's vote will simply increase the number of SNP MP's and that outcome is not one the Tories seem to want either.

Glasgow Times and Herald cannot go against those that pay the bills.
The Scotsman is a waste of time as well.

The best hope is through McAlpine at the Times. She knows some of the facts, a good story two weeks out from the election methinks.

"What Did Gordon Know and When?"

Not much and never.

Not all Scottish print media are in thrall to the Labour Mafia.
Read Mandy Rhodes in Holyrood Magazine
https://www.holyrood.com/index.php?option=com_holyrood&func=article&artid=3479&edition=230&brick=2

City Building has always been corupt from the time David Angus was the Director, Wullie Docherty has just continued this his taking over.
Building Services used to hand back 11 million pounds surplus when part of the Council, now I understan they hand back 2 million, where has all the money gone? hired cars big rises in pay for certain people, how can it work when the head of City Building is married to a Councillor who recently took a large redundicy package from the GHA.
Time Docherty went without any big payment.