Quote of the Day

"The glamorous activist who introduced Labour's manifesto has previously called for the violent death of Margaret Thatcher and for Gordon Brown to be removed as Prime Minister."
- The Daily Mail
The rest of the article is well worth a
read
. Just remember where you read the Thatcher skateboard story first: 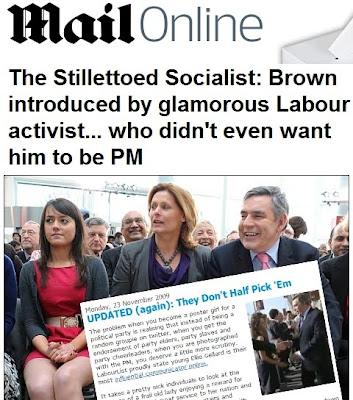 TB has long suspected Bevanie Ellie was a PR disaster waiting to happen. A pretty bad day for Labour and not just because of their comedy manifesto. Did nobody think to do a little research on our Bevanite friend before she was put at the heart of the campaign? Sad truth is most people wanted to get rid of Brown and are now all lying through their teeth that he is the best man for the job.


Oh well, guess there won't be too many tears on May 6th after all...

"Wow.. this is petty.. Ellie seems like a very articulate, bright and passionate young lady, if she was tory totty i'm sure you'd all be raising her up as a rising star yourselves.

The tories best young blogger is "tory bear".. a vile piece of work if ever i saw one.."

also from teh comments:

" Live by the tweets, die by the tweets. Just last week, Scottish Labout ditched Stuart MacLennan over his outrageous tweets and now they're getting someone up to promote the manifesto?

Her comment about Thatcher was out of order and she should be ashamed of it.

That said I can't help but feel slightly sorry for the silly girl. Perhaps it's my horribly reactionary sexist instincts that don't like to see girls get the kind of beasting that she is getting.

I'm damn sure she featured in a movie I was watching the other night.

"TB has long suspected Bevanie Ellie was a PR disaster waiting to happen."

Yes, but she has got nice legs though hasn't she TB ???

Go on, admit it - socialist or not, you'd have a 'bit of posh' like that in an instant, would you not ?

And maybe soon she will be needing a Tory Bear to cuddle and keep her company in her lonely bed in the wilderness..

Go on, TB, think of it as 'putting something back into the community'..

To be fair on Ellie, she may have called for Gordon to 'get his coat' way back when, but she stood by his leadership fervently during the Hewitt-Hoon episode.

Now tell me that doesn't look like Ken Clarke sitting in the background....

Don't touch her with a bargepole, Mr Bear! She probably bites - and you could catch something nasty.