A Law Unto Himself 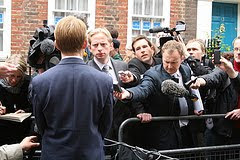 It could just be wishful thinking after a delightful rosé fuelled afternoon rolling around in the garden, dressed up as a commando, with a six and four year old - but flicking through analysis and comment tonight, TB gets the feeling that things are aligned for a swift return for Mr Laws. Michael Moore shouldn't get too cosy in the Scotland Office.

The Prime Minister's reply to Law's resignation letter was unconventionally warm and the choice of Danny Alexander as a replacement for the Chief Secretary job is mind boggling. If the Parliamentary Standards Commissioner taps Laws on the knuckles, or clears him, could we see the former head of communications for the Cairngorms National Park, Danny Alexander, a man of no discernible talent or economic ability, return from whence he came and Mr Laws pick up his axe from where he left off? Fingers crossed.

There are four must read pieces that have emerged in the last 24 hours re David Laws:


This whole story is a tragedy. No one, in any party, can doubt that an honourable and able man has gone. Those who had wanted fast fiscal consolidation have lost a trusted advocate. The government will be all the weaker for it.


The other person in the government who could do the job—Phillip Hammond—can’t because he is a Tory and the role is reserved for a Lib Dem. With the best will in the world, it is hard to imagine that Danny Alexander will be able to do the job with the ability that Laws was doing it.

Matthew Parris is
bang on the money
:


Of course Mr Laws made an error of judgment. Hundreds of MPs have cocked up badly as parliamentarians scramble to keep abreast of violent and bewildering changes in the national mood. The present Defence Secretary handed back £22,000 in March. Hundreds have made repayments.

Meanwhile, other MPs across the United Kingdom are living, with a declared partner, in accommodation wholly or partially funded by the taxpayer — entirely within the rules.


So I regret his going and hope the Telegraph's more thoughtful readers are as unimpressed as I am. Perhaps the newspapers really are losing the plot in their – our – battle to retain sales share.

I agree - they are going to push REALLY HARD for him to be reinstated ASAP... let us pray we get Laws and economic order back into our finances.

Fab. A multi-millionaire leaves 950 pounds on his sex partners nightstand each month and then charges it to the taxpayer. He should get a peerage.

TB - Don't bank on it. Do you really want Cameron to do a Blair and recall someone a la Mandelson & Blunkett?

Better follow the instincts of M. Thatcher (Mrs) re Cecil Parkinson. Cecil quit in 1983 for shagging his secretary (something that wouldn't bat an eyelid today). But she still insisted on several years' exile, plus a new mandate. Which means for Laws not till 2015, or maybe 2012 if he submits to a byelection and wins.

When will you talking heads "get it".

In the real world we dont care how clever he is, if he was gay or not, if he was "out" or not or even if he was a circus stilt-walker in his spare time.

But we care deeply about him breaking the rules and stealing our money.

All the whitewash in the world from CallMeDave,those you list in your article and any others in DemTories coalition will not change the fact that he broke the rules. I dont care if he could have claimed more by doing it a different way - but he didnt do that - he broke the rules.

I hope Mr Laws has a few weeks to sort out his personal life - and in particular, has the space and privacy to talk to his parents who will be deeply upset by his 'outing' and his sudden fall from Office - and then returns to his job as Chief Sec to the Treasury.

The Coalition Governnment - and the country - needs him. Alternatively, could Philip Hammond be pursuaded to switch from the Conservatives to the LibDems for a couple of years so he could do the job?

I am not known as a forgiving person, but even a hard-hearted b*stard like me feels a twinge of regret at David Laws’ departure.

Previous posters cannot be faulted in their observations as to his guilt and under different circumstances I would be agreeing with them wholeheartedly.

But the country is trying to dig its economy out of the biggest pile of s*it in its history. David Laws will be a key player in the Government’s success or failure – Danny Alexander manifestly will not.

He did wrong, got caught (or judging by the blogosphere, stitched-up by his own Party colleagues) and paid back the money. So did Dave – so did Bruin – neither had to resign.

His best move was to swiftly resign his Ministerial post, which at least shows honour and contrition (rare commodities in a modern-day politician).

Let him be judged by the proper Authority, punished as appropriate, but then begin working as an ‘Advisor’ to George Osborne. A view can be taken later with regard to his return to Ministerial office, but in the current crisis we do not have the luxury of being overly judgemental of the people that might just save the country from joining Greece as one of the world’s ‘basket-case’ economies.

Goodness me! He stole 40K. That's approximately 30 years of my income tax payments. I think most people would prefer to think of their tax being spent on, say, nurses or medical supplies or even prison food, not some millionaire's millionaire boyfriend's rent. He's a thief.

Stop spinning this like it's homophobia, that it's sad such a good man has been tricked. If I stole £40,000 I'd expect the clink, not this awful, partisan, tribal waffle about how sad it is that I got caught.

It's not homophobic to think that a thief should be punished. The fact that he only loses his job is the disgrace.

I mistake,
You err
He is mistaken
They steal