A Tale of Two Launches 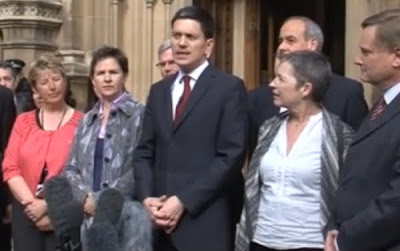 When David Miliband declared his candidacy for leader last week, his straight out of the block approach lead to a rushed launch with a group of exhausted, miserable, barely know Labour MPs. All as old or older than him. Having just fought and lost the election campaign, David Miliband looked like one of the guilty men, awkwardly trying to congratulate Cameron before being able to turn the conversation to his announcement.

Compare and contrast his younger, less dorky brother Ed's launch at the eugenics loving Fabian Society's conference this morning. Note-less and comfortable in front of a audience, his bid was greeted with sustained applause. Has someone being having a little media training? 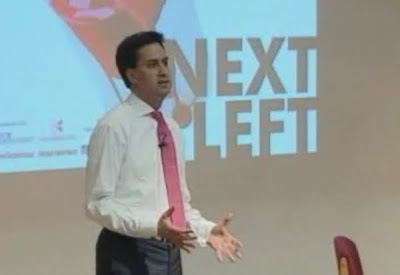 It was hardly a tough crowd for Miliband the Younger to launch his pitch to the semi-respectful, squeezable, soft left block of his party. It was more David Cameron to David Miliband's Davis. There he was jacket off, "descamisado" style, setting up his stall to the metropolitan Labour chatterers, reminding them the need to break out and fight in the rest of the country.

Just the two images show who has the better team in place, the better campaign up and running. David might have the support of a fair chunk of Labour's heavily deflated parliamentary party on side, but lest we forget the members and the unions have just as much say in this fight. Through AV David must win outright in the first round to avoid floods of second preferences for Ed pipping him to the post.And just because an MP has publicly declared doesn't mean they won't change their mind. This is going to be a very long summer for Labour.

It's important to remember these brothers haven't been exactly been allies for years. David was tightly embeded with the Blairites and Ed very much Brown's man through the last thirteen years of infighting and potshots. There will be no love lost here - when David Miliband was out there making noises before chickening out, his little brother was on TV defending Gordon against him.

No wonder Ed was so willing to drive a wedge through his entire family, to rebel against the natural order that was previously carefully adhered to. He's on to a winner here.. It can only be a matter of time before this is turned into a TV drama.

There late unlamented father was one of the nastiest Marxist historians I read- an apologist for all that eminated from Moscow and that included Stalin's purges and mass executiond.

I'll bet they'll airbrush that from any campaign biogs.

He's always seemed like a pointless twerp to me, and his effort today came across like a naff seminar presentation. More Alan Partridge than David Cameron (or maybe Gareth Cheeseman).

Half of me wants a total no-hoper to become Labour leader, but with the number of seats they managed to retain, I do have the nagging fear they might actually wind up as the PM in a few years time.

Tweedledee here is certainly someone Mandelson would think he can mold into some kind of Blair 2.0 How nauseating.

Ed Miliband is a winner. David did not score well because he was a bit 'unlucky' with TV coverage of him post-election looking 'green' due to some unfortunate colour balance on the picture.

Unlucky people don't get to the top in politics, but the only thing about Ed is that he looks a bit TOO media trained. He seems to have been on one of those courses they send BBC reporters on [think Marr, Peston et al] to make huge efforts to express themselves with their hands...

He needs to chill a bit with that, and he will be fine.

Gives us an opportunity to paint Labour as the Party of Privelege though doesn't it?

Since Charlie Whelan has UNITE's votes and money, I would say that his man (Ed Balls) had a built in advantage in this campaign and not either of the Milibands; unless Ed Balls decides not to stand and UNITE swing behind another Brownite, albeit Brown lite - Ed Miliband. However if you want a proven campaigner, who has actually won a leadership-type election in the Labour party (and that's quite a unique title these days) then look no further than Harriet Harman. As she is no longer deputy leader and so no longer constrained by her mantra of therefore not running, could she really not run and leave the leadership position to 'a man'? I think not and what a battle this could be between the MPs choice David Miliband, the Union's choice Ed Balls, the wimmin's choice Harriet Harman, the compromise candidate Ed Miliband and maybe a left-wing candidate...

Surely this is just traditional dynastic strategy? One son joins the King, another the jacobites, The Family wins whatever the outcome.