Cox out the Blocks

Craig Cox
has launched this video this morning outlining his supporters and ideas:

"Sound ideology" is quite the dog whistle and intriguing to see a candidate pledging to go up against the government. 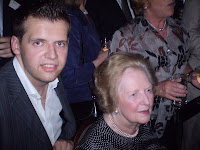 While Cox is a late starter, Ben Howlett is still on his nationwide tour, last seen somewhere outside of Scunthorpe "listening". Just kidding, but it looks like he did have an intriguing chat
last night
.
Simon Cavalier Jones
is picking up endorsments of branches, but whether they will all fall into line outside of his northern heartland block remains to be seen. Cox's entry has raised the bar for the rest and they need to get their web and media stuff up to scratch quickly, especially Howlett.

There is a hustings tomorrrow. If you can't make it leave your questions in the comments below and TB will see what he can do.

Interesting Campaign Video. The names were scrolling a bit fast for me, but I am sure I saw at least one duplicate in the first and second batch (Laura Sharp)

Interesting how Cox sounds off on his website about "Cf candidates looking like they are running for President of the United States" and then he creates a video that looks like he is a Republican candidate for the Presidency.

Sorry but I am disgusted by Howlett, everybody knows Baroness T is suffering and for any Candidate in this election to force themselves upon her for a photo opp is cheap cheap cheap. Glad the other candidates had the sense to leave her too it.

Howlett really should feel ashamed of himself.

Cox's use of social media must have the other candidates quaking in their boots.

"Exclusive: Howlett stands behind Lady T and claims endorsement." His campaign of exaggerations just gets lower and lower.

The best thing with all this is that Cavalier-Jones or Cox, will be the next chair of CF. Both decent guys who are respected. That will be a massive plus for CF.

How dare you mock the supreme leader Howlett?

Dear Bear, can you please ask the following questions

1) Why Ben Howlett tried to claim the support of numerous branches that don't support him/ don't exist?

They all say they're sound. Sadly I won't be at the YBF hustings. Could you really press them on a few policies for me?

I'd like to know if any of them would decriminalise drugs, if any support Ken Clarke's prison reforms, and just how much they'd love to lower taxes. I only want to vote for a real Classical Liberal/libertarian. Oooh, and throw in a question about whether CF should co-operate with Liberal Youth (I expect some interesting answers there).

I would very grateful,

Can you please ask Ben Howlett where our £40 is from the time he came to Lincoln, why he ran away from the bill? why he has ignored our e-mails and why when the story went public he responded by attempting to smear us?

Can you please ask Craig Cox, how on earth with his background he thinks he could be a credible chairman?

Could you please ask Cavalier-Jones, who the f*** he is.

Could you please ask Howlett why he said he was being forced to attend the YBF hustings?

Can you please ask Howlett why he alone thinks it's appropriate to exploit and 85 year old dementia sufferer?

Can you please ask Ben Howlett why he claimed our branch endorsed him, when we did not? and when in fact we are not even a CF branch?

Could you please ask Ben Howlett why exaggeration and lies are his main campaign tactic?

Can you please ask Ben Howlett why he bought my 15 year old male cousin drinks in a pub? And why he ran away and called the Police when my uncle had a go at him.

If they where all Nachos what flavour would they be?

The big question of the day is, did they watch CBBC or ITV as kids

Please ask each Candidate about their commitment to Equality and Diversity?

Ask them why no "famous/high profile" candidate is standing?

Can you please ask Ben Howlett and his campaign team why they have conducted a campaign that makes Ed Balls look like a choir boy?

Bear can you please explain to the audience why your so anti-Howlett, this won't be good for you when he cuts you off after he is elected.

How have i been anti-howlett?

You have never given Ben fair coverage, always taking the piss and are nasty about him. Ben has done more for CF than anybody else in the last few years, you should be ashamed.

I for one will stop reading you, as will Ben and the rest of the team.

But why are you so anti Ben? You should be fair, Ben is the only candidate who deserves to be Chair. If your not careful your coverage could ruin it and let somebody else in.

I have a cunning plan, instead of this election stuff going on, why don't we settle this via a Boxing Contest:

Winner is the next CF Chair! What do you say? Maybe we could have a girls section to, Kit Friend Vs Swann etc.

Umm I wonder if any punches will be thrown tonight!

Umm interesting prospect, if tonight ends in a punch up between the 3, my money is on Cavalier-Jones. I don't think cox or Howlett could get close enough to punch back. Giant man, giant.